Discover the Swiss Alps with the panorama train

An idyllic summer in the mountains

A different kind of summer retreat: on the panoramic trains of the Rhaetian Railway, travellers enjoy the idyllic Swiss Alps. The journey takes you past the impressive mountain scenery, rushing rivers and the lush green of the mountain meadows. A trip on the Bernina Express or the Glacier Express is at the top of many holidaymakers' bucket lists. No wonder, because especially in the summer months the journey through the Swiss mountains unfolds its very own charm.

Spectacular crossing of the Alps with the Bernina Express

The Bernina Express is the highest railway line across the Alps, connecting northern Europe with the south. It takes guests from Chur in Switzerland to Tirano in Italy and back in just one day. The panoramic train masters 55 tunnels, 196 bridges and gradients of up to 70 per thousand on its journey. From the glaciers glistening in the sun, the journey takes you all the way to Italy's palm paradise. The tour starts in Chur or St. Moritz, from where guests pass through the southern Alpine valley of Valposchiavo before enjoying La Dolce Vita in Tirano.

The route is even considered a UNESCO World Heritage Site and hides numerous highlights. One of the world's most famous landmarks of the Rhaetian Railway is the Landwasser Viaduct near Filisur. It leads over the Landwasser Valley directly into a mountain tunnel. Built without scaffolding using two cranes, the construction of the three main pillars in 1901/02 was an architectural masterpiece. 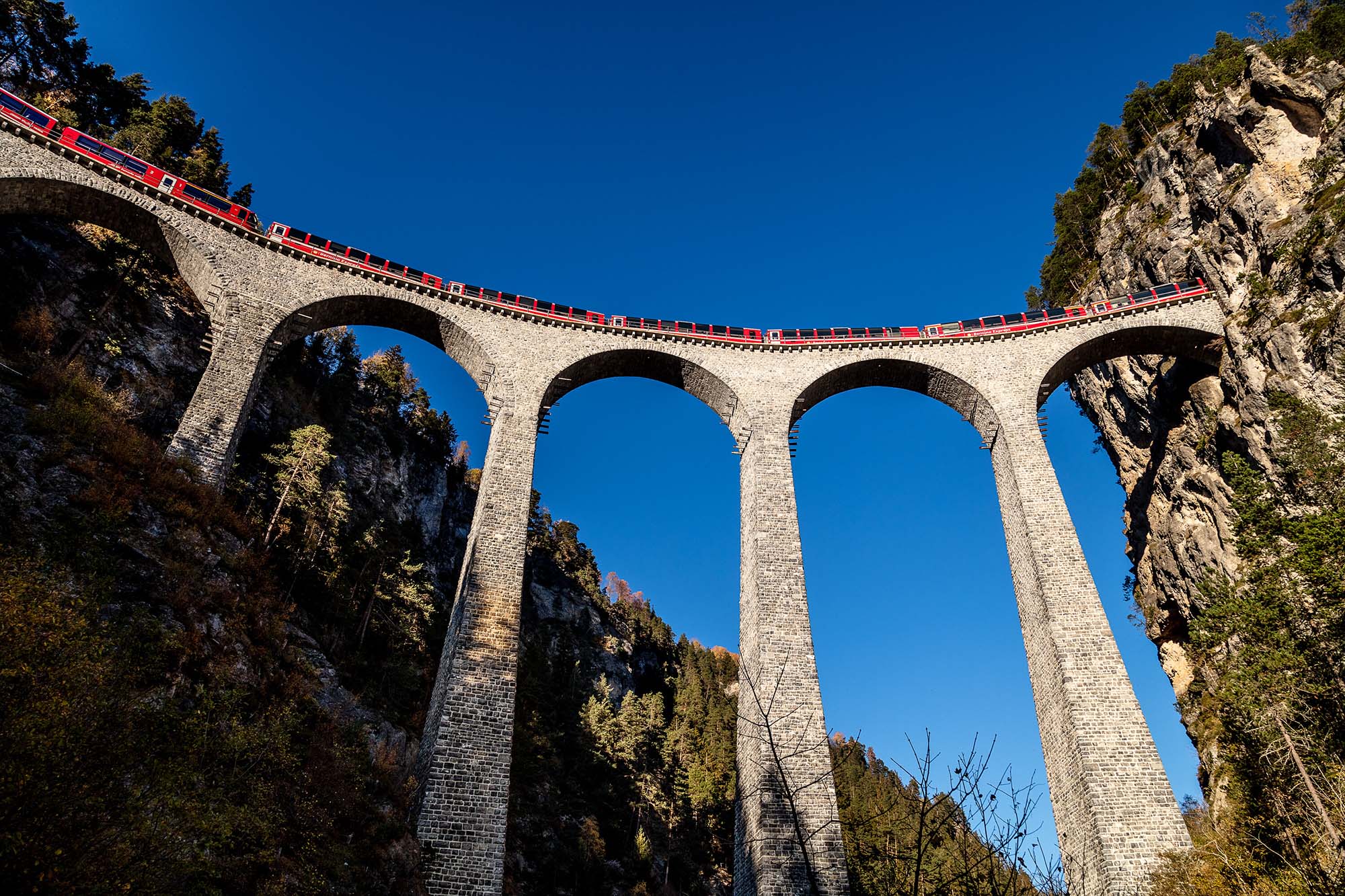 Mountain peaks as far as the eye can see are on offer at Alp Grüm station. On the border between Switzerland's German and Italian-speaking regions, passengers enjoy an impressive view of the Palüt Glacier, the Bernina massif and the Bergamo Alps. 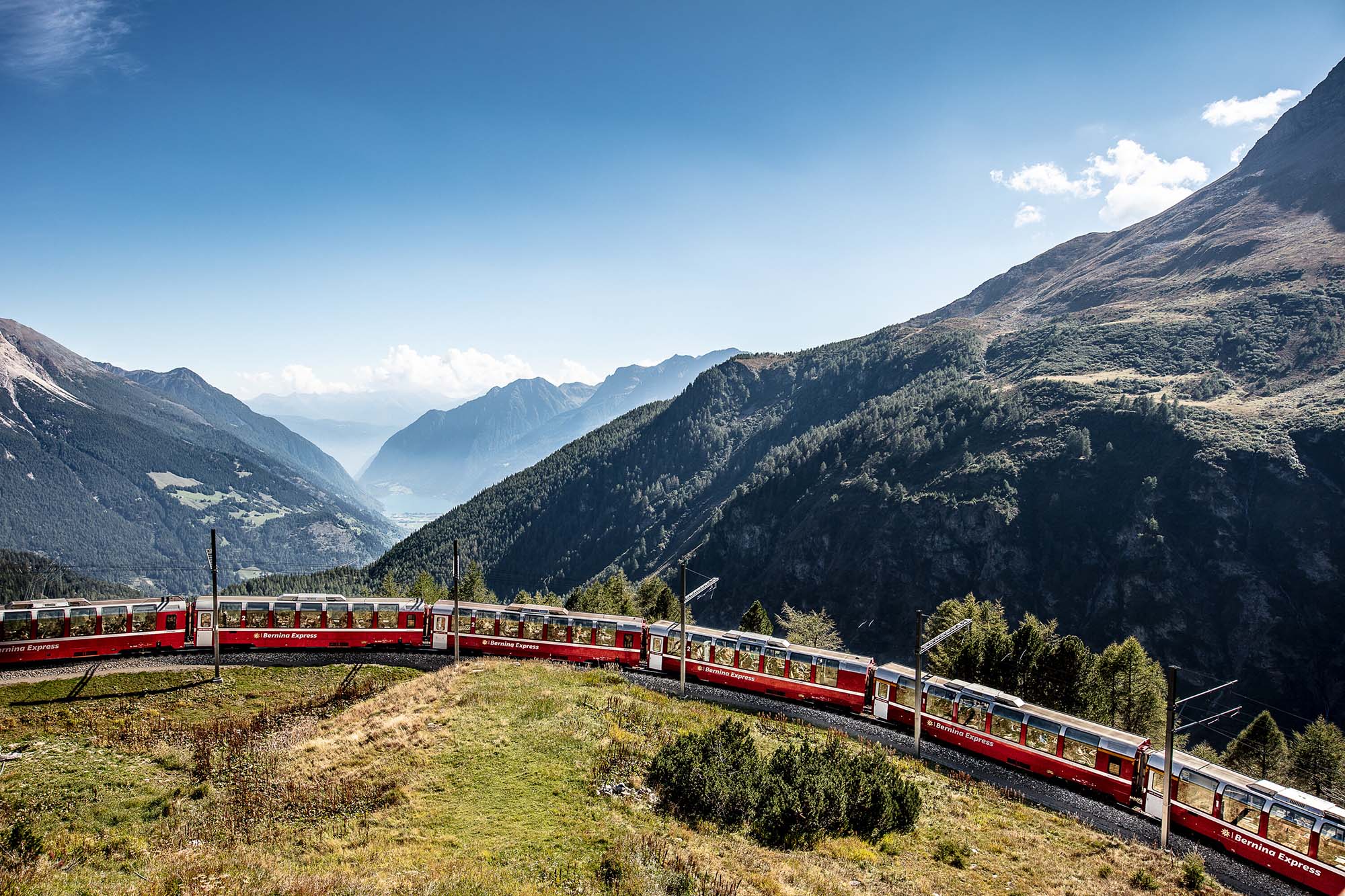 Hiking, strolling and enjoying: The southern Alpine valley of Valposchiavo shines with its beautiful nature on Lago di Poschiavo. The historic village centre welcomes guests with a charming piazza and fine regional delicacies. Also worth a visit is the stately "Spaniolenviertel", built by emigrants, with its magnificent palazzi. 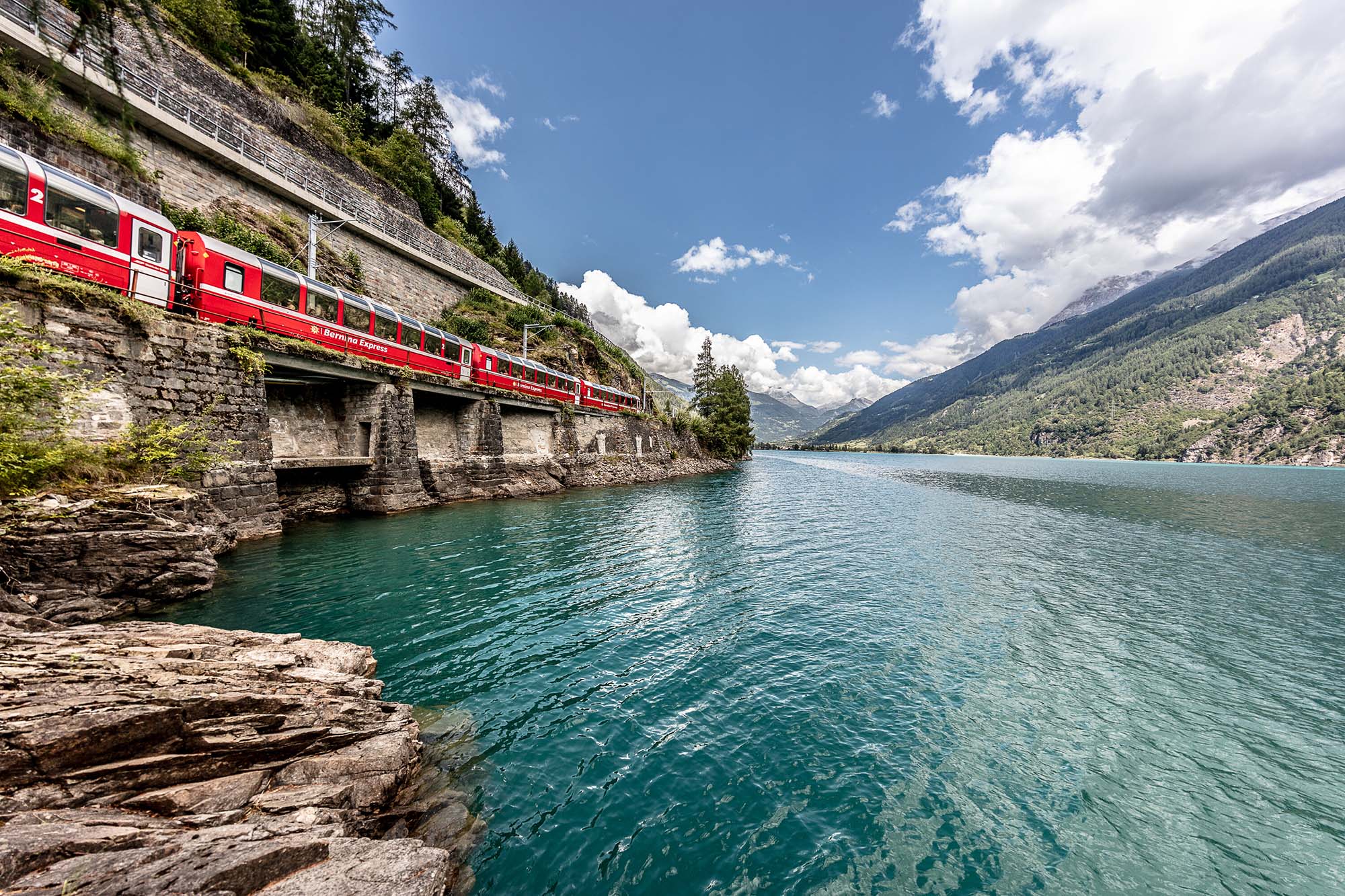 The journey on the panoramic train takes you past the beautiful Lago di Poschiavo. Credit: Rhaetian Railway

Glacier Express: the slowest express train in the world

The route of the Glacier Express runs from sophisticated St. Moritz over the Rhine Gorge, Switzerland's Grand Canyon, to Zermatt. The panoramic train winds its way over 291 bridges and through 91 tunnels. At the end of the journey, the imposing Matterhorn rises before the guests. As an alternative to starting the journey in St. Moritz, guests on the Glacier Express can also board the train in Filisur in the canton of Graubünden.

The eight-hour journey offers numerous highlights that will amaze you. St. Moritz shows its best side all year round with an average of 322 days of sunshine. It owes its world fame not only to its picturesque location in the Swiss Engadine, but also to its healing springs, which are thousands of years old. Thanks to the springs, St. Moritz has long enjoyed great popularity as a summer health resort. 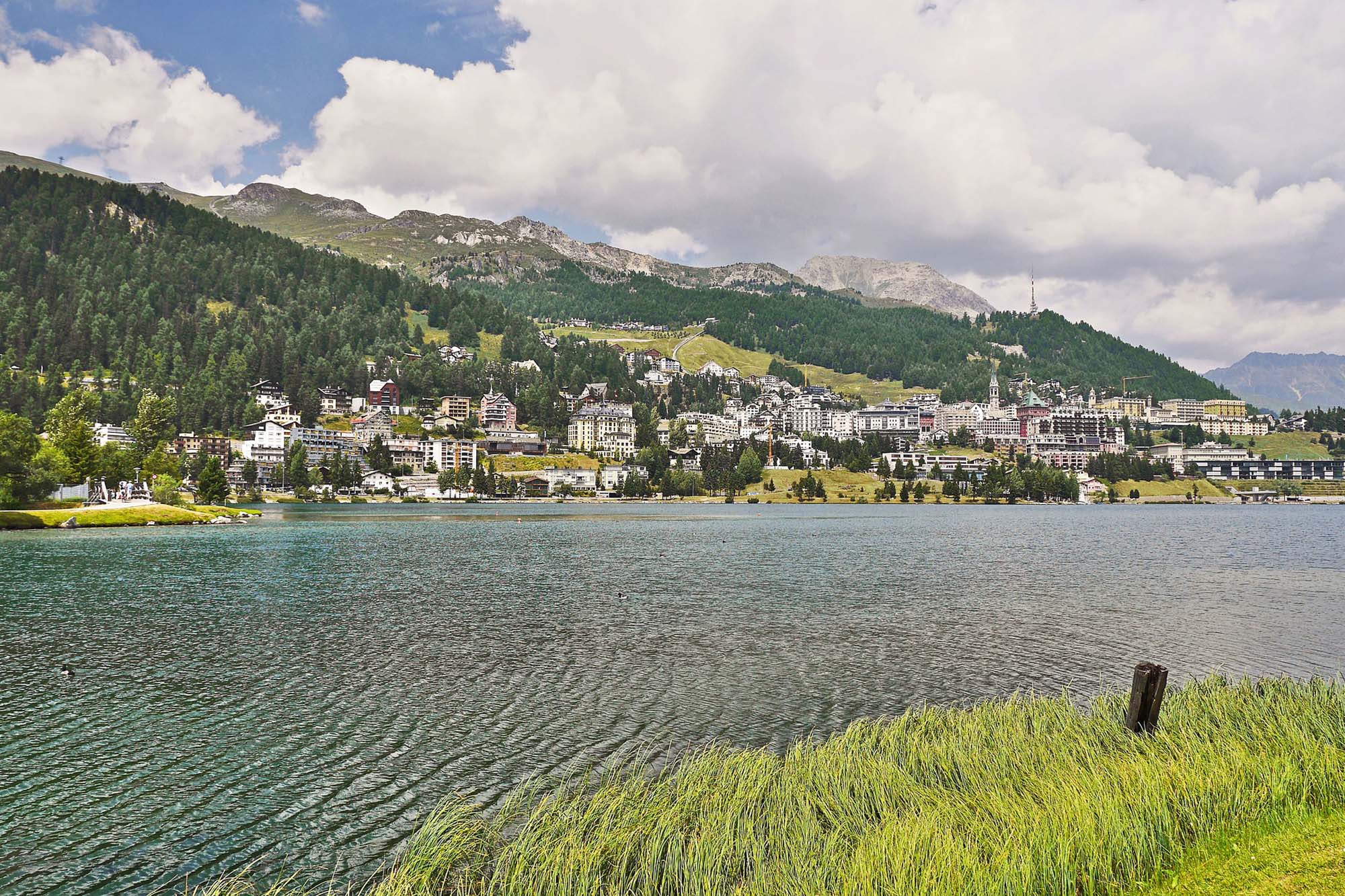 The journey on the Glacier Express is both adventurous and unforgettable. Credit: Rhaetian Railway

Between Ilanz and Reichenau, the Glacier Express winds its way through the Rhine Gorge, Switzerland's Grand Canyon. Through the large panoramic windows, guests catch a glimpse of the steep, white rock faces and the crystal-clear waters of the Rhine. The monumental Rhine Gorge, called Ruinaulta in Romanesque, can only be crossed on foot, by bike, boat or train. 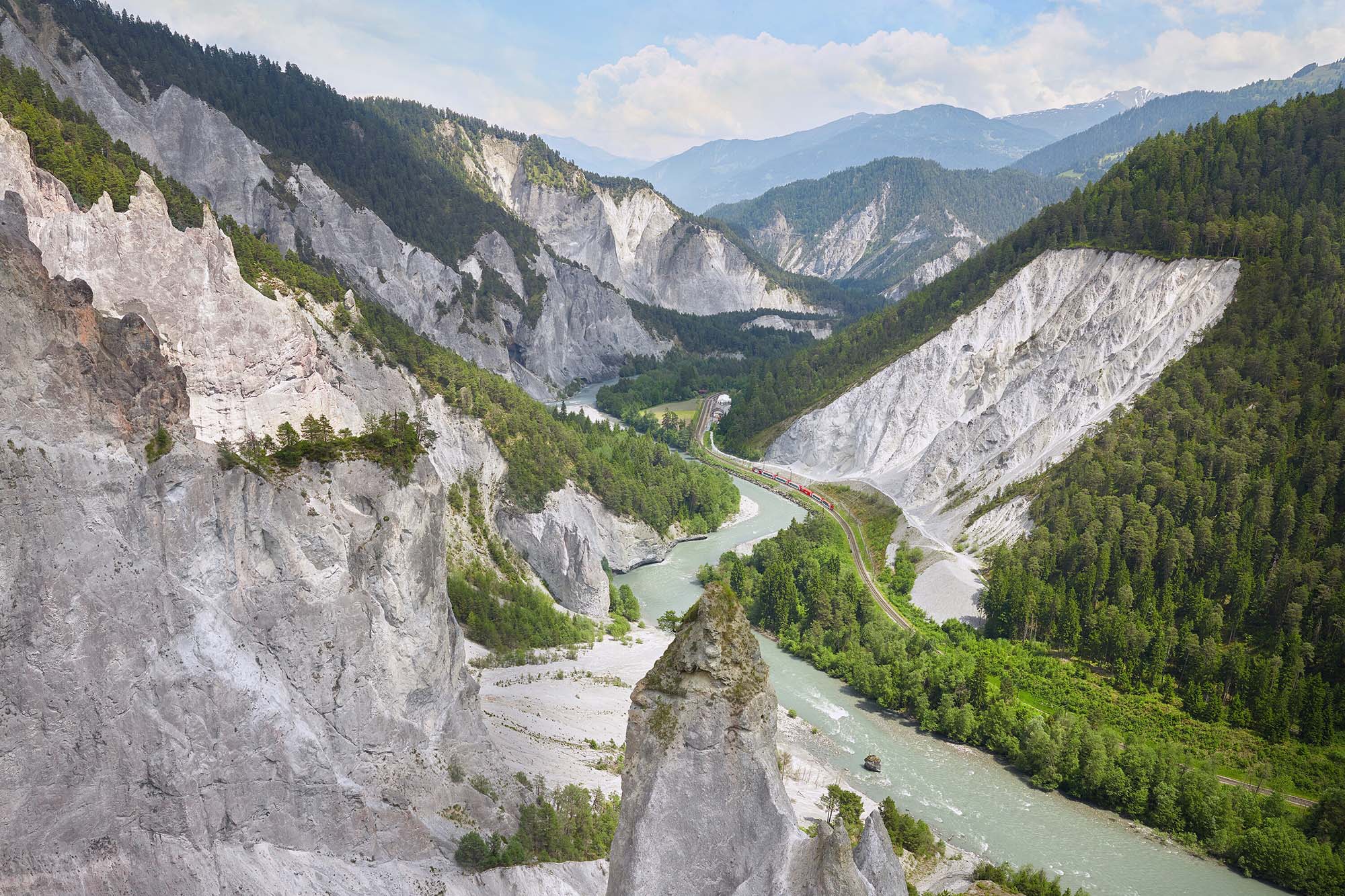 Another highlight of the trip: The impressive Rhine Gorge. Credit: Rhaetian Railway

Majestic mountains as far as the eye can see: several peaks over 4,000 metres surround the mountain resort of Zermatt in the Swiss canton of Valais. One of them is the Matterhorn, the most photographed mountain in the world with its striking pyramid shape. An excellent view of one of Switzerland's most famous landmarks is offered from the Gornergrat with its sunny viewing platform.

At the end of the journey, the impressive Matterhorn awaits passengers. Credit: Rhaetian Railway