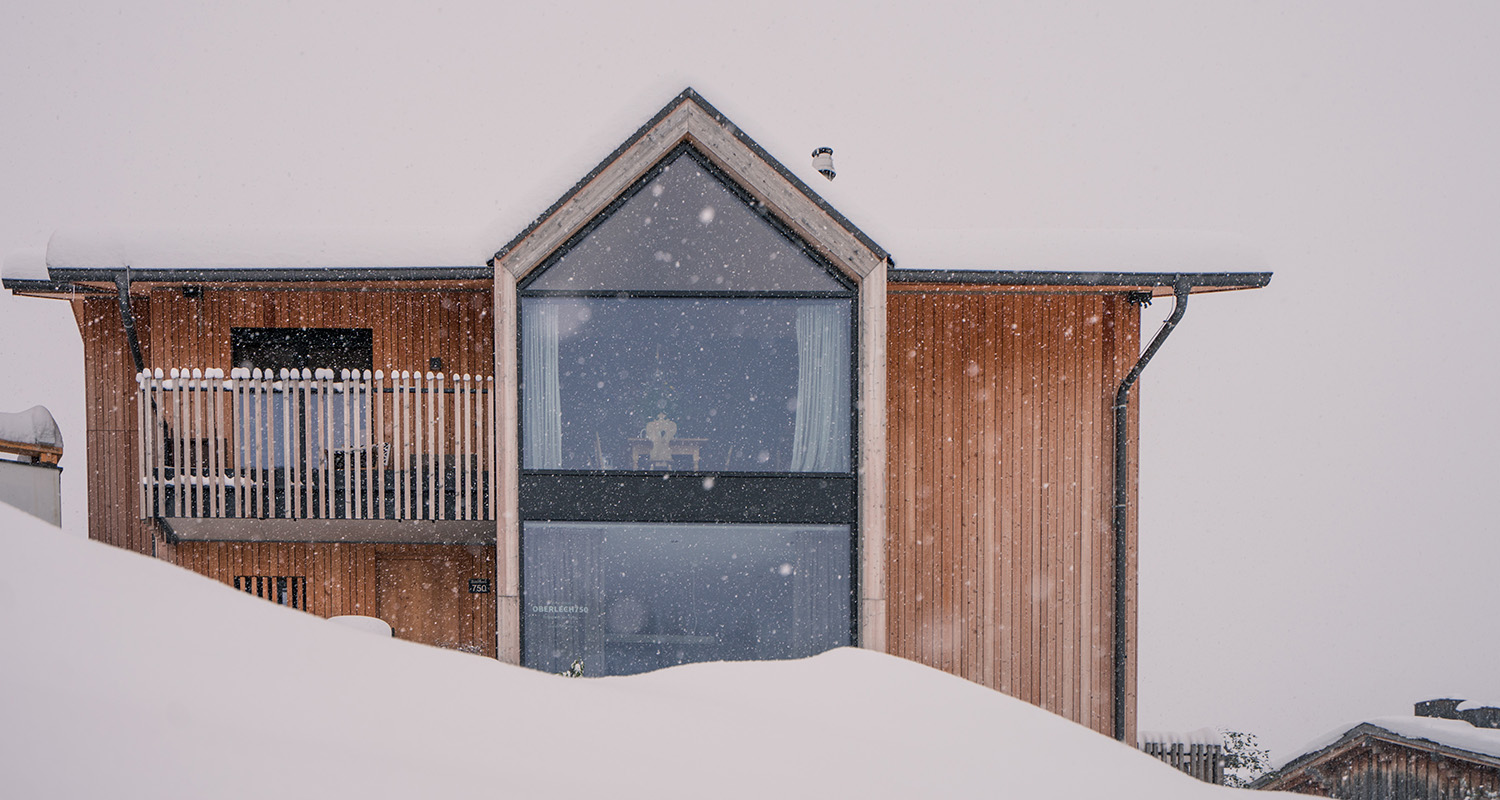 The refuge under the moon

Golden faucets, butler service, star restaurants - you won't find any of that in the self-catering apartment "Oberlech750". But a warm hostess, fragrant mountain herbs and probably the most beautiful (and quietest) place on the Arlberg.

The "Oberlech750" is a true oasis on the Arlberg. This jewel was planned and built by three women: Host Cornelia, yoga teacher Susanne and dry stone wall queen Christl. In doing so, they followed the lunar calendar. If Cornelia, the hostess, thought that it was not ideal to lay the screed or install the windows, then the craftsmen just had to put up with it. The result is impressive: modern architecture meets traditional materials.

Cornelia Rieser has a sleep problem. No matter where the Arlberg native was traveling in this world, her journey always began with two or three sleepless nights. Until one day she spent the night at the Forsthofalm in Leogang. It was a Swiss stone pine bed. "I wasn't even lying completely on my side when I saw the sandman and a whole lot of dust," she recounts with a smile. Today, such a bed stands in the "Oberlech750", in Rieser's "refuge" on the mountain. "Come up. Come down," is the slogan of the young hostess and deputy mayor of the ski resort of Lech - with Cortina D'Ampezzo in Italy, St. Moritz in Switzerland and the American Aspen probably one of the best board destinations in the world. Golden taps, butler service, star restaurants - none of that, however, is available in the self-catering apartment "Oberlech750". You can have a five-course meal, of course. The only condition: you have to cook it yourself. For this, you have the high-tech kitchen with steamer, oven & co. at your disposal. And a cottage feeling is also provided for thanks to the fondue set.

But what makes the "Oberlech750" so special is Cornelia. Robert Cialdini, psychologist and author of the book "Influencer" from 1984 (!) says: "We like people who like us." And Cornelia you just have to like. You don't have any other choice. As soon as you get even close to the refuge, you feel the aura of the warm hostess. And the special scent. The whole house smells like an enchanted fairytale forest. These are mountain herbs from their own garden that Cornelia takes as a scented fire and serves as tea. Lavender, lady's mantle and rose petals are processed by the Oberlecherin into bath salts. But there is much more: 70 square meters of home feeling and an indescribable view of the "Omeshorn" and the "Mohnenfluh". "Our guests should leave everyday life behind, retreat and feel at home with us," promises the likeable lawyer. However, the 44-year-old adds, "at the highest level!". Instead of being involved in boring small talk conversations in the sauna, the "Oberlech750" is a place to concentrate on the essentials and relax, she says. Just for people who appreciate pleasure, exclusivity and seclusion. 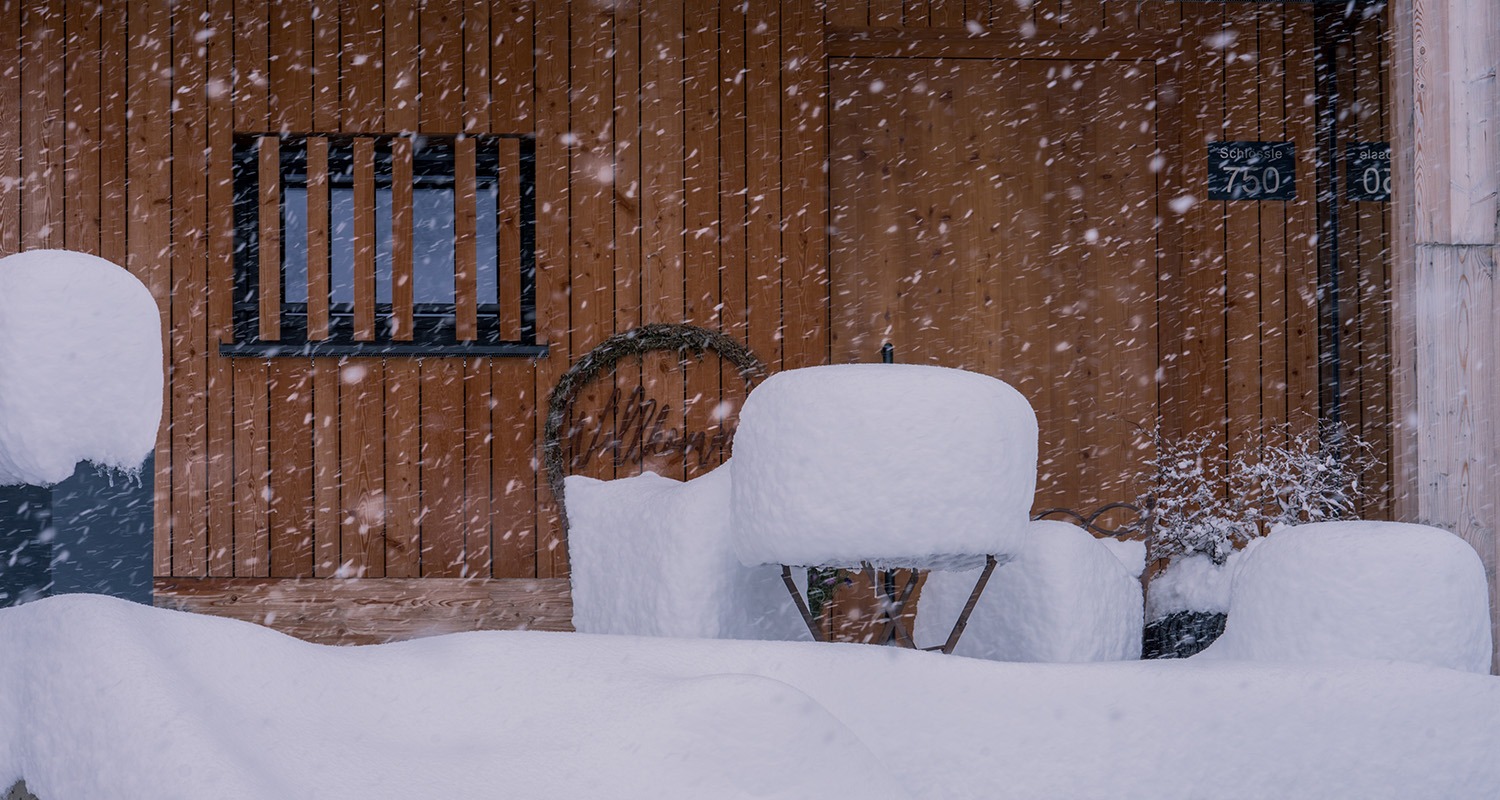 Cornelia, who lives one floor above the refuge together with her partner Martin and daughter Lilian, feels that the nest feeling is particularly important. So important, in fact, that she turned her back on Innsbruck in 2015 and has now "nestled" back in Lech with its 1,500 inhabitants. In the "Schlössle" district, there are just five families who live there all year round. In 2015, there was a reason why Cornelia wanted to return. At that time, the power woman's health was not good. She wanted to do again what she did as a child, experience the day. As if from a child's eyes. Day by day, hour by hour, minute by minute. To feel the mountains, to recharge her batteries, to experience silence and harmony. Or as her friend Susanne Grässle, art director and yoga teacher, puts it: The "Oberlech750" is a place where heaven and earth touch.

The Austrian host Cornelia and the Swabian Gautama Master Susanne Grässle (she wrote the text for the homepage), the dry stone wall queen Christl Graf made sure of this. Christl has hewn every single stone of the natural stone wall next to the mountain sauna in countless steps by hand, so that they fit together to form a complete work. Cornelia, Susanne, Christl: Power women - proverbially - on all levels. And they don't let men interfere with anything. If Cornelia thought that this or that phase in the lunar calendar was not ideal for laying the screed or installing the windows, then the workmen had to put up with it. And wait. They obeyed. Did they have any other choice? No! The result is impressive, after all, modern architecture meets traditional materials such as silver fir and heirloom fir. Concrete combined with loden, leather and local wood. They fit into the light-filled rooms perfectly, says Cornelia. 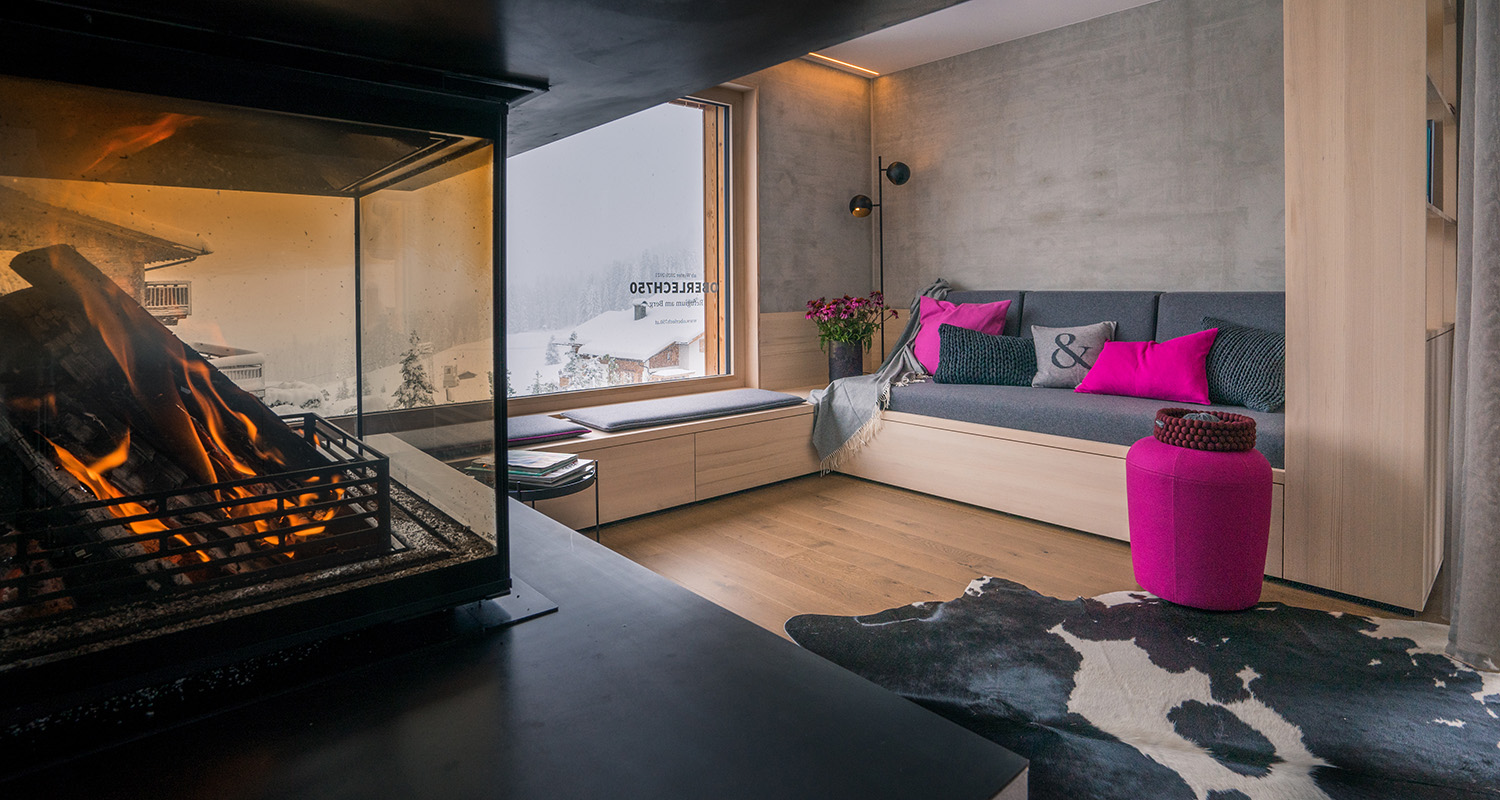 Cornelia and her partner Martin could use the cozy niches for retreat at the favorite place at the window, but not the fireplace. Cornelia had explicitly warned Martin not to fetch the firewood "on this day". Martin, however, did not believe in the Rieser lunar calendar, after all, the first firewood that Cornelia had delivered would have burned. Man stop! However, when this was out, Martin's firewood came on. Nothing. Not a spark, not a flame. Nothing. Nada. "Since that day, Martin has also had a lunar calendar," Cornelia says with a laugh. "There are just things between heaven and earth that you can't explain," Rieser says, though without being spiritual or esoteric. She believes in the moon, herbs (and Martin).

Martin works in Mellau. That's only a 35-kilometer or 40-minute drive in the summer. In winter, however, when the connection between Warth-Schröcken and Lech is closed, he has to go via Bezau, Dornbirn, Feldkirch and via Klösterle, Stuben and Zürs to Oberlech. Martin does this every Friday afternoon. "I savor every minute up here," he says, looking out the snow-covered glass facade. The panoramic seating window with its breathtaking far-reaching view is his favorite spot. What unites them both? Both Cornelia and Martin sleep like little children here at 1750 meters above sea level. What Martin doesn't know until today: Martin sleeps on sheepskins from a natural bed manufacturer in East Tyrol. They were delivered on a new moon day. On that day, the signs pointed to a new beginning. 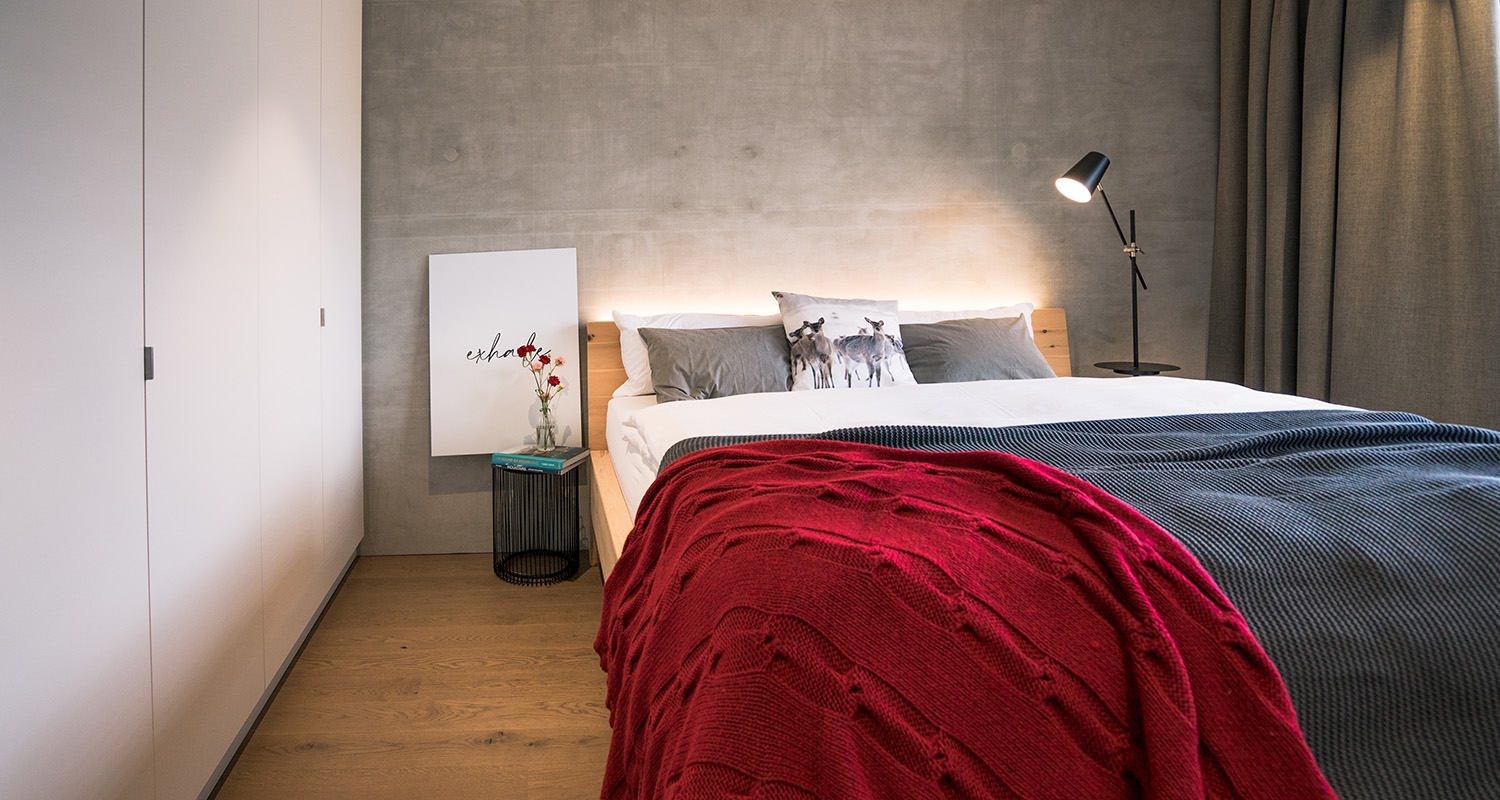 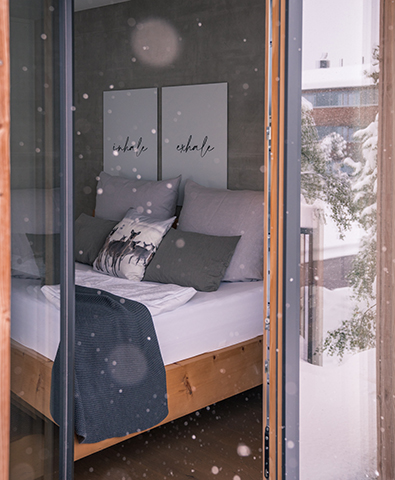 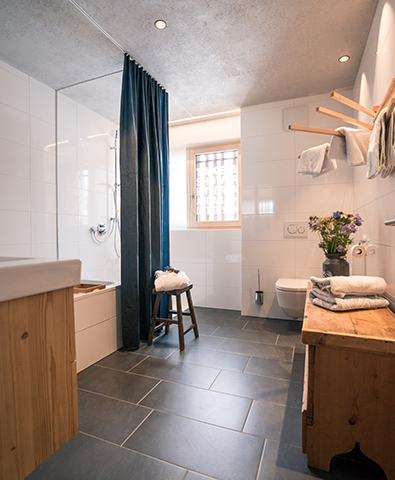