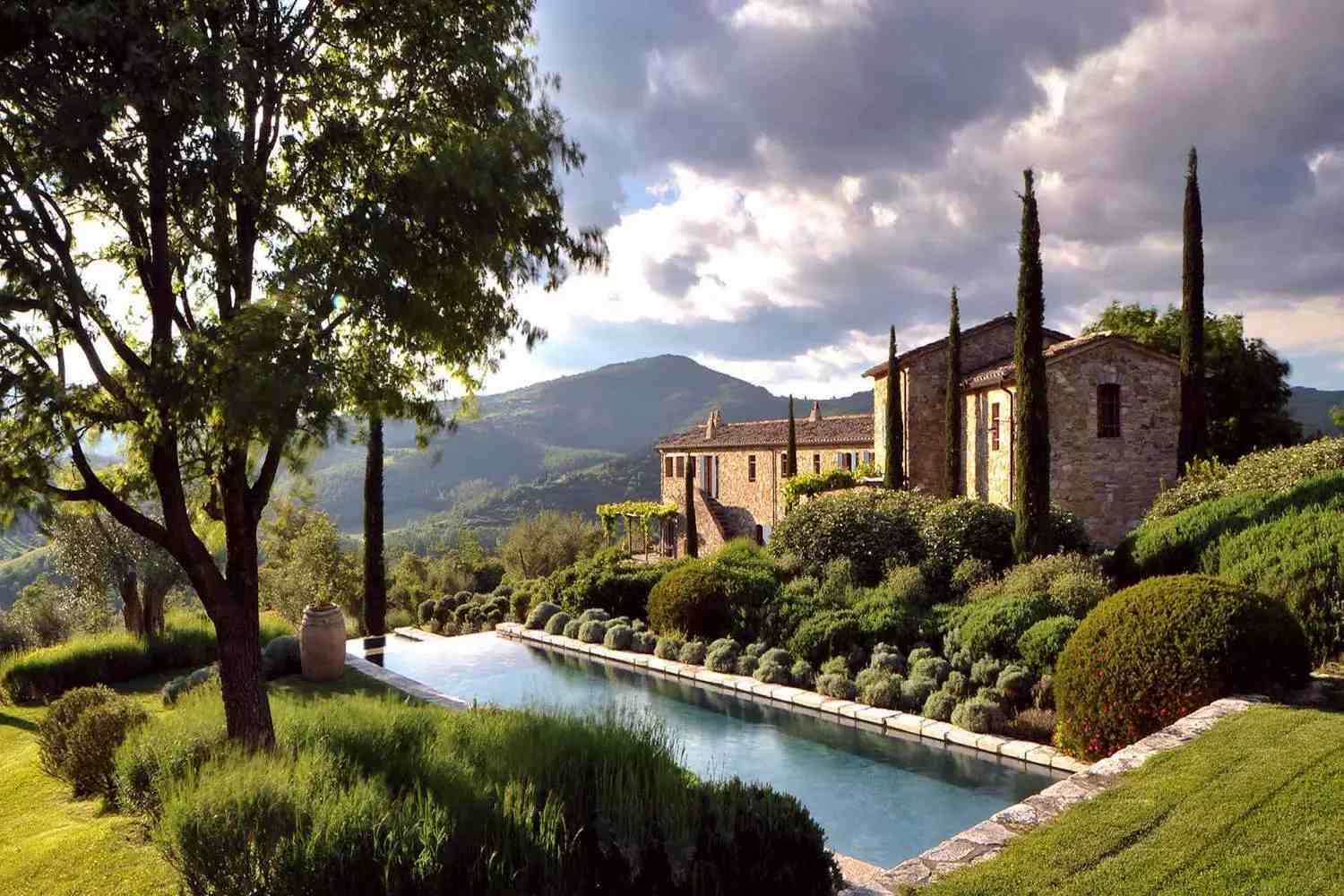 The evolution of an Umbrian legend

The Castello di Reschio Estate stretches over 1,500 hectares in the hills of Umbria on the border with Tuscany - its centrepiece, the "Castello", a castle dating back to the 10th century. In 1994, Count Antonio Bolza bought the estate with the aim of breathing new life into this forgotten stretch of Italian countryside, located between Perugia and Siena, together with his family. In the more than 25 years since, Count Bolza's son, Benedict, and his wife, Donna Nencia, have set about restoring over half of the medieval farmhouses scattered around the estate, transforming them into unique villas for new owners. Ten of them will be rented out to guests. Benedikt Bolza, a renowned architect, takes a personal approach to each of the listed buildings, from the design to the implementation of the architecture based on the original structures, to the interior design and the selection of art objects. The result: Umbrian originals whose character comes out in the always right mix of rustic and modern-elegant. The Ristorante Alle Scuderie, which will open in summer 2019, is also a work by Bolza in the unmistakable style of the Estates and marks another milestone in the history of the development of Castello di Reschio. And Reschio's 40 noble Andalusian horses, descended from one of Spain's most prestigious stud farms, Yeguada Candau, have also found a new home in the recently constructed riding and stable complex. Castello di Reschio announces the completion of its most ambitious restoration project to date in April 2021: Then the "Castello" will open its doors in a new guise with an innovative underground spa area as well as a "farm-to-table" restaurant. 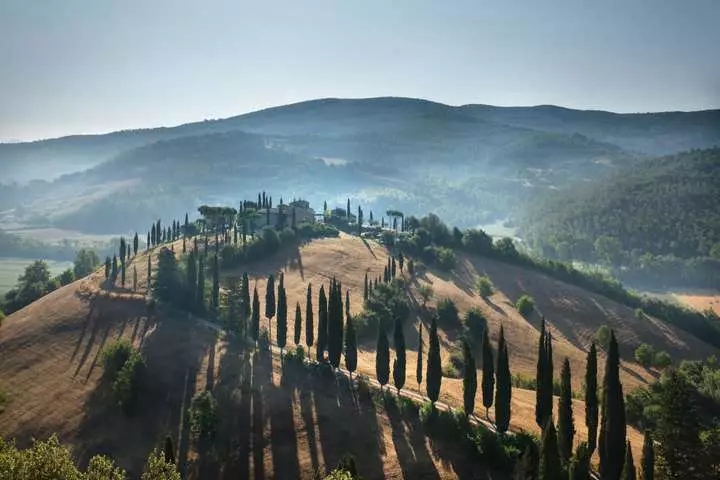 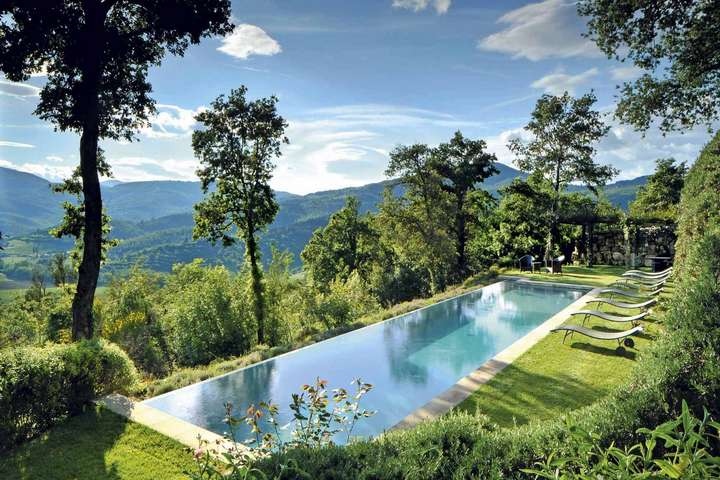 Luxury holiday in a unique ambience

Benedikt Bolza leads each project at Castello di Reschio from his creative base, the Tabaccaia di Reschio, a former tobacco processing factory from the 1940s, located at the entrance to the estate. Thus, each ruin takes shape according to his vision as a contemporary gem of architecture and interior design. Bolza relies on traditional Italian construction methods and skilfully combines the old with the new. Together with local craftsmen, stonemasons, blacksmiths, tile makers, lighting architects and restorers, he has worked tirelessly for over two decades to produce some of Italy's most exquisite country residences and holiday villas - each home unique and designed in close consultation with its new owner. However, all the villas on the Castello di Reschio Estate have one thing in common: far from it all, they invite you to immerse yourself in Reschio's sweet seclusion, natural scenery and aesthetics. For Benedikt Bolza's brief goes far beyond that of an architect, encompassing all aspects from landscape design to interior decoration. Many pieces of furniture and lighting are designed and produced by him in his BB for Reschio workshop, or are selected at smaller antique markets and art fairs around Italy. The frescoes that can be seen in some of the villas are also the work of his wife Nencia, an artist from Florence. For some years now, Benedikt Bolza has been turning his attention to the jewel in Reschio's crown, the castle that he himself lived in with his wife Nencia and their five children for about a decade. To one day convert this into a hotel has been a long-held dream of the Bolzas. On April 21, 2021, the time has come: the heartbeat of the estate will once again emanate from the "Castello", which promises to become one of the largest hotel sensations in Italy with 36 rooms and suites, a restaurant, spa, bar, library, pool and various wondrous spaces for spontaneous meetings, concerts and events. 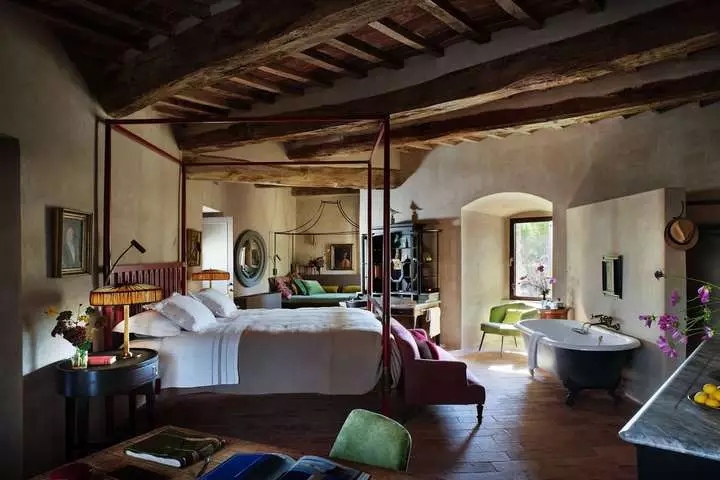 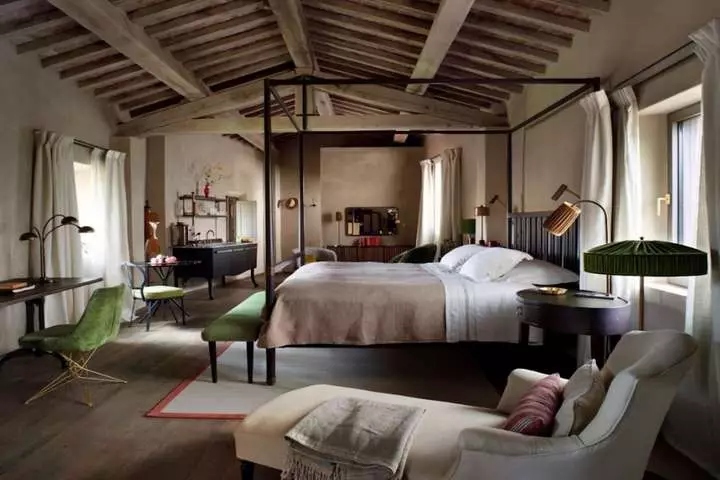 Close to the newly opened Equestrian Centre and Theatre, a bronze horse's head, the work of a British sculptor friend, Nic Fiddian Green, illustrates the central place of horses and their grace in the Estates' universe. Count Antonio Bolza learned to ride at the age of 54 and finally bought his stud farm in 1994. To educate and train the horses in the fine art of dressage, he hired Antonello Radicchi, known for his gentle yet highly precise methods. Guests are offered the full spectrum of equestrian pleasures, from riding lessons and vaulting for children to horseback rides through the property's varied terrain. In the summer, a weekly dressage show brings guests and holiday villa owners together. Other activities offered at Reschio include hiking, tennis, swimming in the estate's private lake, cooking classes, olive oil making workshops, clay pigeon shooting as well as truffle hunting parties and painting and drawing lessons. 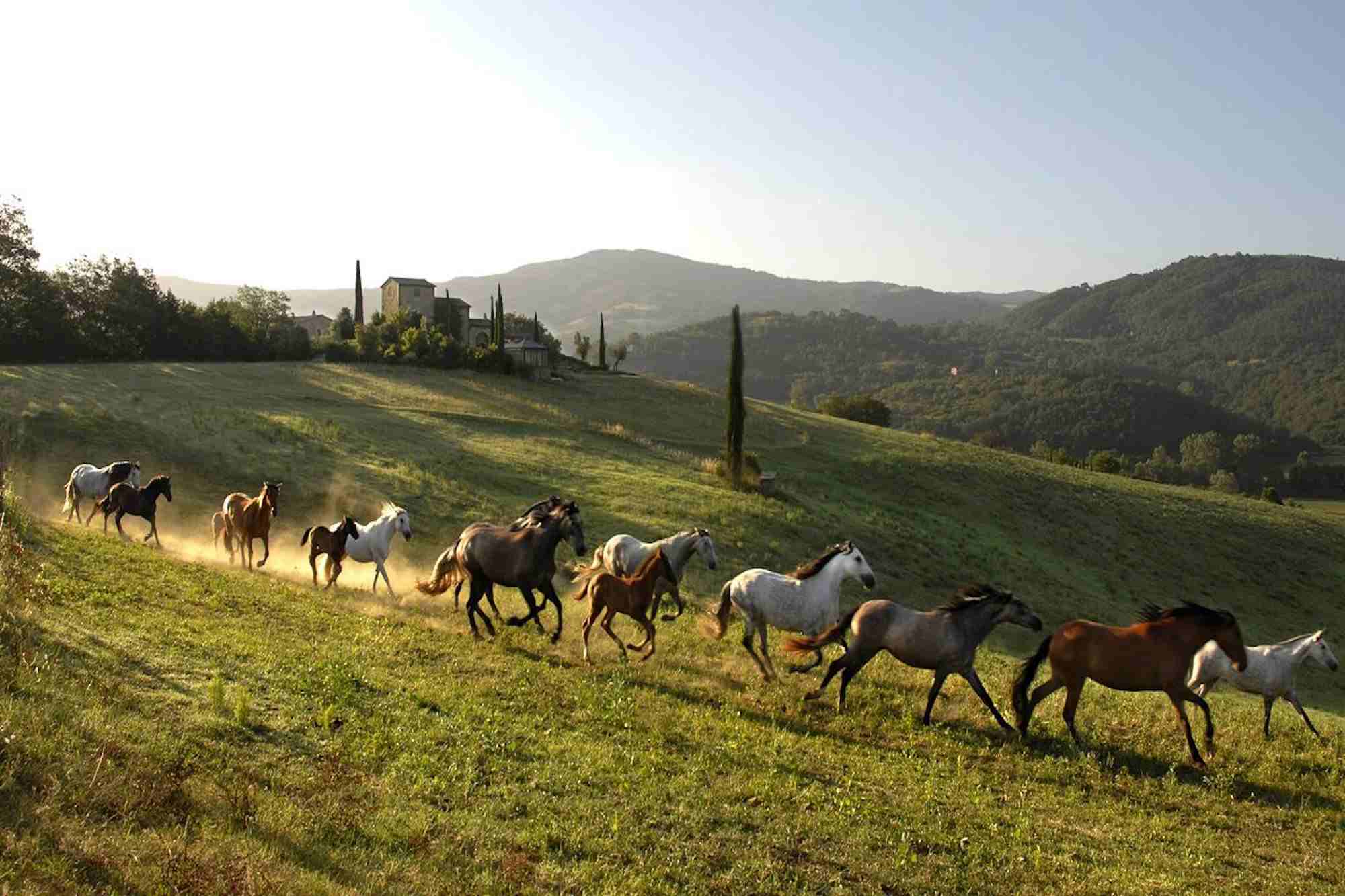 Naturalness from the garden

It is no coincidence that the Bolzas have increasingly developed organic farming on their estate in recent years. Artificial fertilizers are taboo at Reschio, so the land here naturally rewards with an abundance of root crops, berries, fruit, shoots and sprouts. The house's synergistic garden, where diverse vegetables thrive amid flowers, herbs, fruit bushes and other coordinated plants, is slated to expand fourfold within the next year. Eventually, its produce will feed the Estates' two restaurants. And the olive groves on the Estate, with their more than 5,000 trees, are also sustainably managed. Their early harvest provides an oil of particularly high quality, which is produced and served on the estate. Last but not least, Reschio has its own million-plus bees, which are responsible for the organic Millefiori blossom honey, as well as its own vineyards consisting of Sangiovese, Ciliegolo, Cesanese, and Merlot vines. 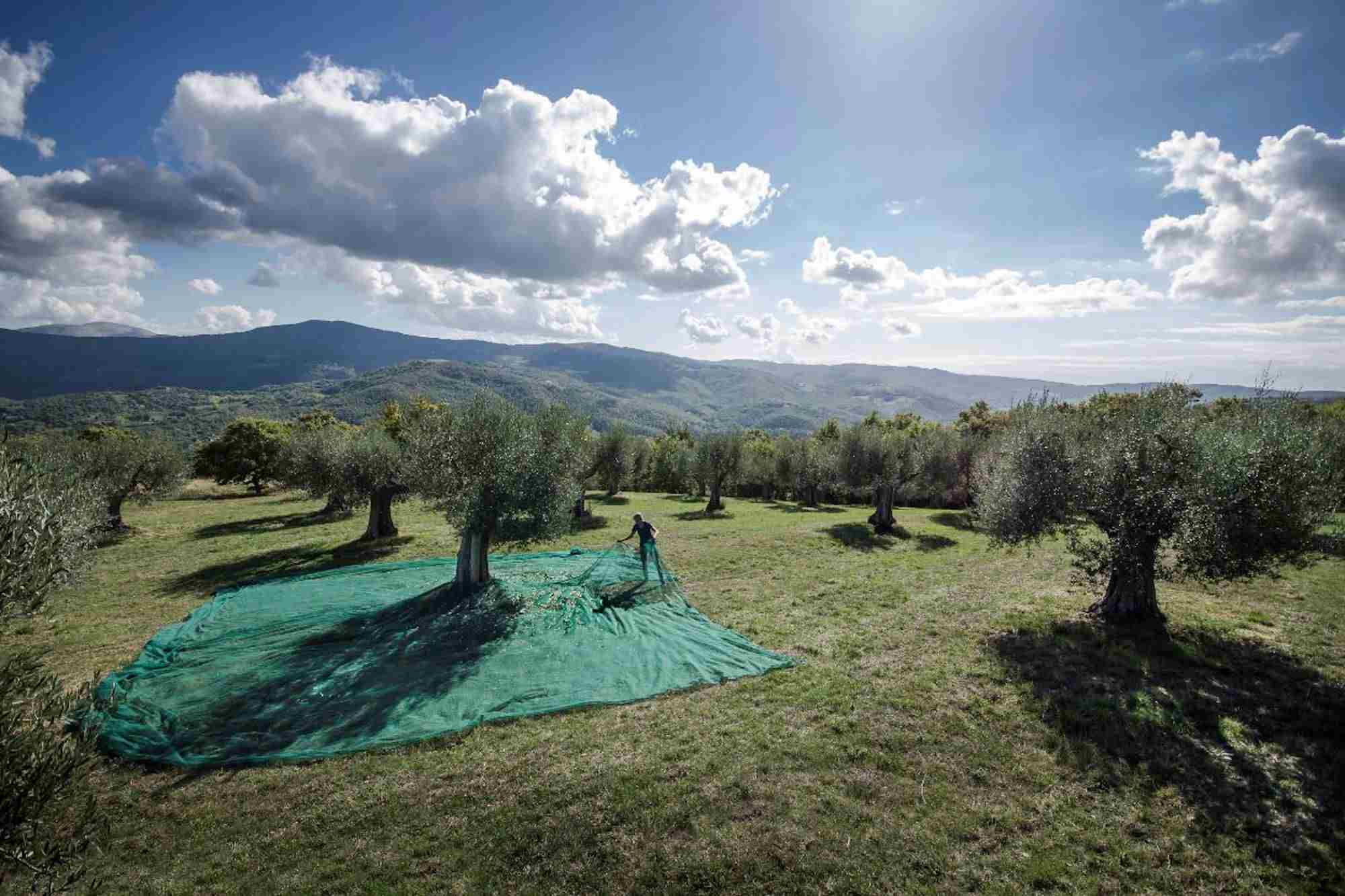 Castello di Reschio, a private estate on 1200 hectares with 50 medieval farmhouses and a castle, is located in the heart of the natural scenery of Umbria. 20 houses have already been sold and restored by architect and interior designer Benedikt Bolza, together with his team, into original villas according to the wishes of their new owners. Six of the houses already sold will be made available for rent as luxury holiday villas, varying in size from two to seven bedrooms. The remaining homes are for sale, in combination with the exclusive design and turnkey restoration service that makes Reschio renowned worldwide. Security and privacy are among the benefits enjoyed by both individual villa owners and rental guests at Castello die Reschio. Amenities such as private housekeepers and chauffeur services are available to them. The range of activities and pursuits on and around Reschio promises variety: swimming in the private pool, jogging, mountain biking, tennis, hunting, fishing, horseback riding and much more. On request, a cooking lesson with one of the talented house chefs can be arranged, but if you just want to sit back and relax, you can be cooked for in the osteria or privately in the villa. The cities of Assisi, Arezzo, Siena, Cortona and Perugia are about an hour's drive away. In the middle of the property is the Bolza family's Andalusian stud farm, where some of the finest purebred Andalusian horses in the world are bred and trained. Architectural Digest Magazine ranks Benedikt Bolza among the 100 most imaginative and inspiring architects of our time. Benedikt Bolza also designs furniture and lighting pieces under the brand "BB for Reschio", which can be found in the Castello di Reschio Interiors and can be purchased on site.