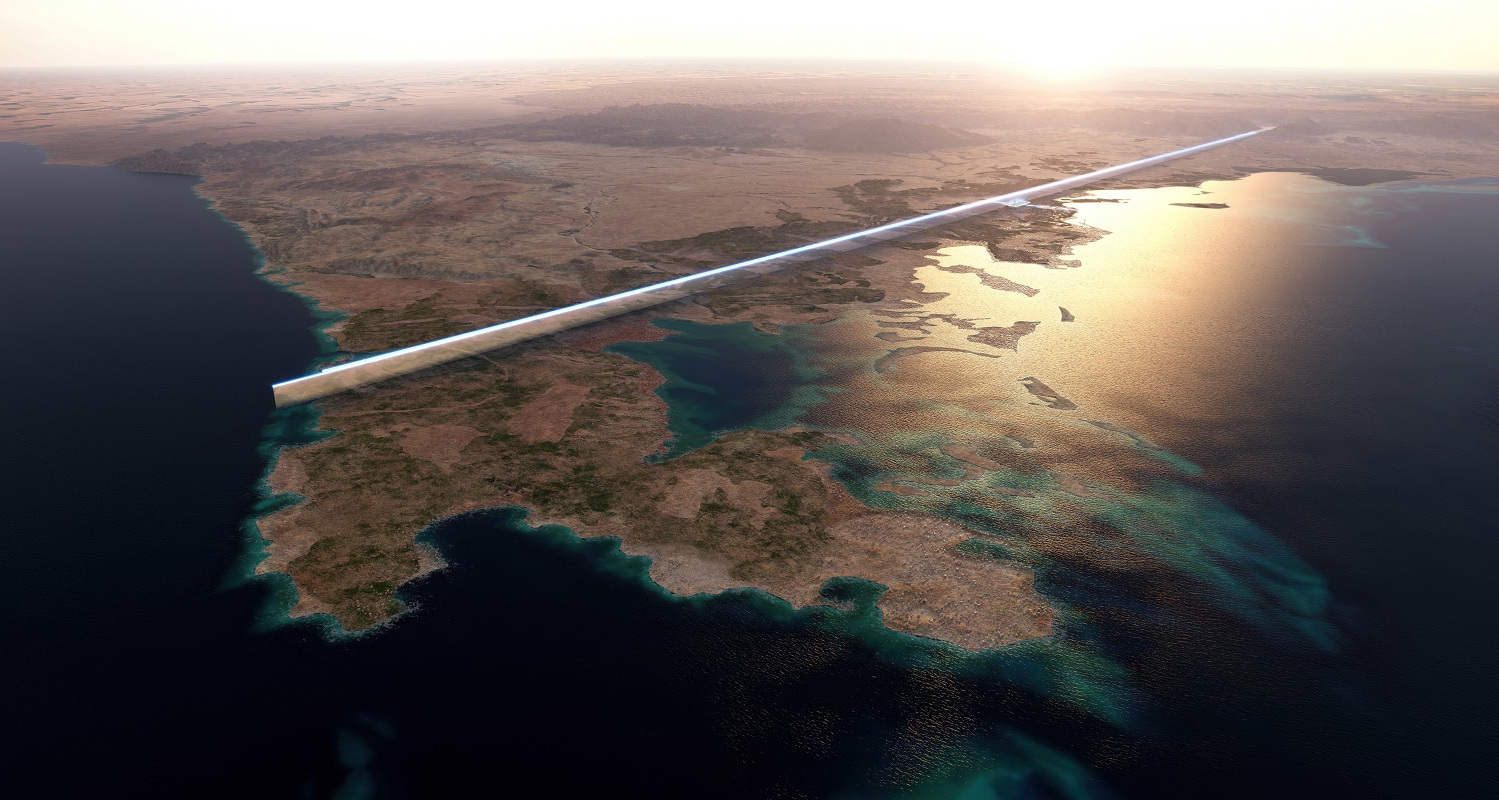 THE LINE: Is Saudi Arabia Building the City of the Future?

The new mega city is expected to provide space for up to 9 million people, with no cars, roads or carbon monoxide emissions.

170 kilometers long, 500 meters high, 200 meters wide and completely mirrored on the outside: this is what Saudi Arabia's new megaproject is supposed to look like, according to recently published renderings. What at first glance looks like a design object in the middle of the desert and somewhat reminiscent of the concert hall Maraya in Al'Ula is to provide space for 9 million people in the future. It's THE LINE, Saudi Arabia's vision of the most sustainable city ever built.

Green city in the desert

It's part of the "Vision 2030" project with which Saudi Arabia wants to minimize its dependence on oil. The lying mega-skyscraper is to become the central building of the planned city Neom. When completed, it will be 32 times the size of New York and extend across the three states of Saudi Arabia, Jordan and Egypt. If the project succeeds, it could actually mean a revolution in urban planning. 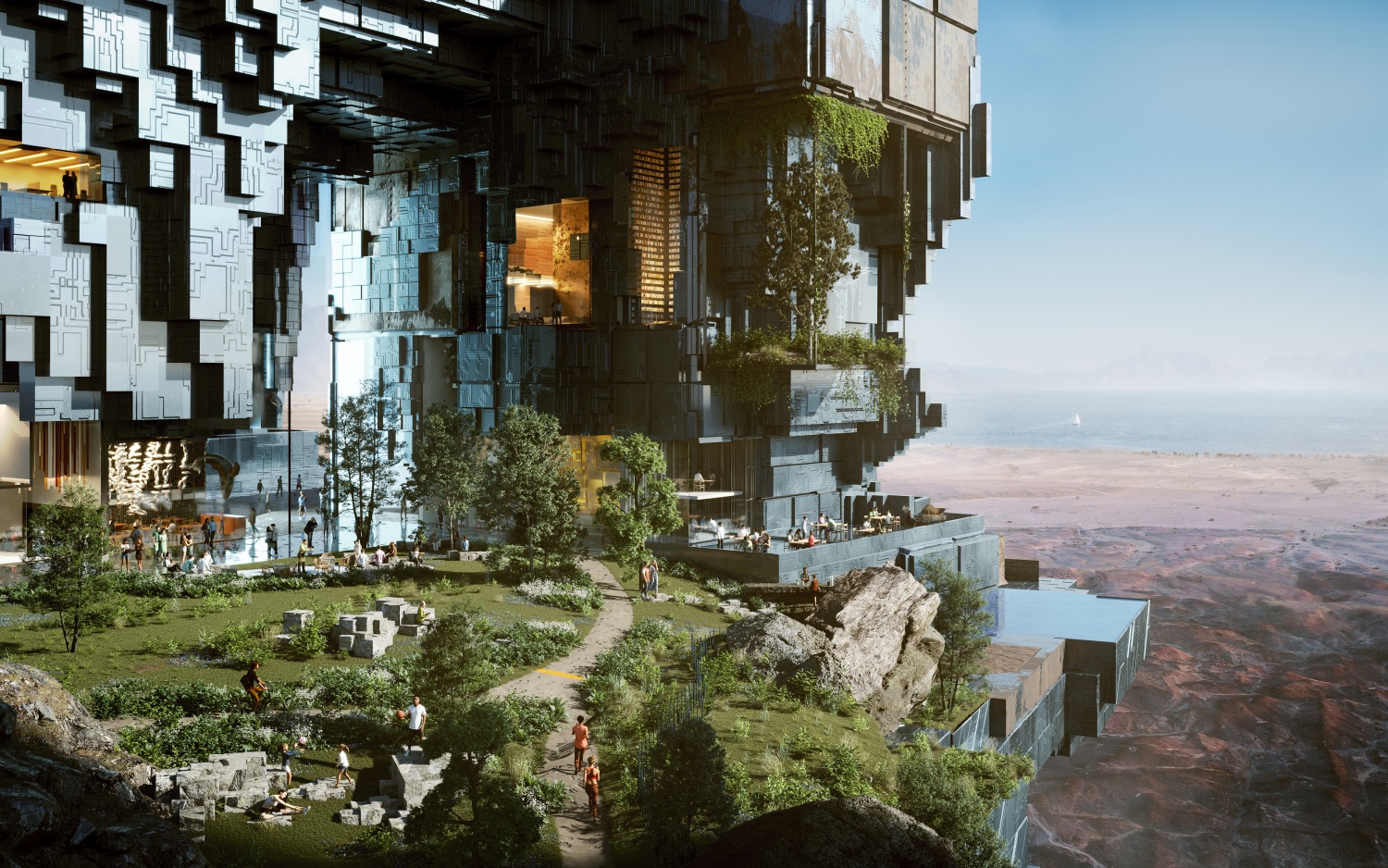 Little obstructed area and as small an ecological footprint as possible – the THE LINE is revolutionary, at least in theory. © NEOM

After all, there will be no motorized individual transport. People will either walk or take a bike. The three-dimensional layout enables residents to reach all important stores and facilities within a five-minute walk. Those who want to get from one end to the other can take the high-speed subway. It only takes 20 minutes to cover the distance.

According to the plans, the city's energy supply will be provided by solar technology and wind turbines. Goods will also be transported underground. Or by air, as it has been announced that the project team has already ordered ten air cabs and five heavy-duty drones from the German company Velocopter. Who knows, maybe they're already in contact with Eviationas well. It would certainly be a good fit. 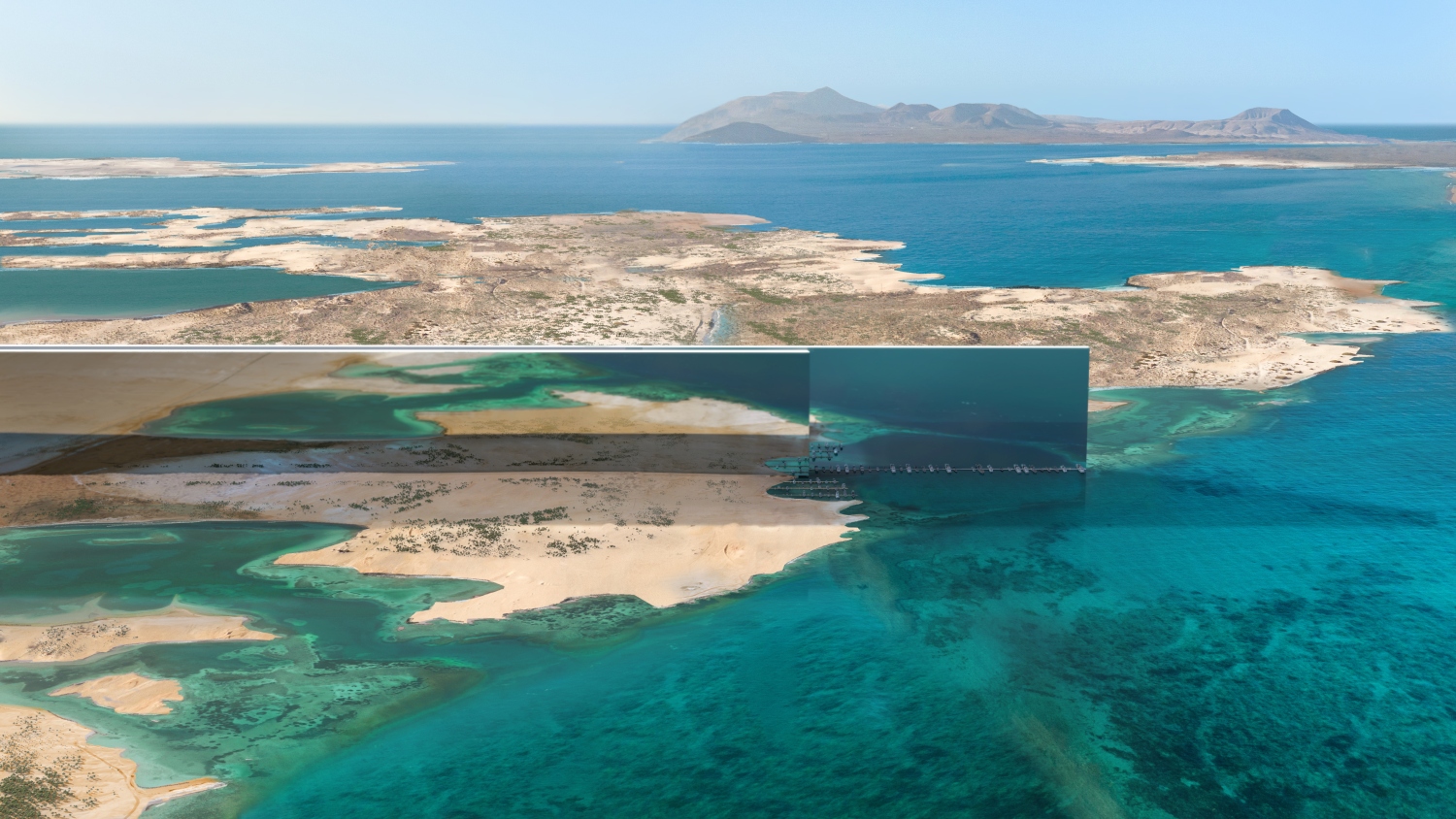 One end of THE LINE, which actually consists of two ultra-long skyscrapers running parallel to each other, leads directly to the coast. © NEOM

The initiator of the project, Crown Prince Mohammed bin Salman, is also considering laws of its own for the mega-city. These could, for example, allow a more self-determined life for women and the consumption and sale of alcohol in strict Islamic Saudi Arabia. 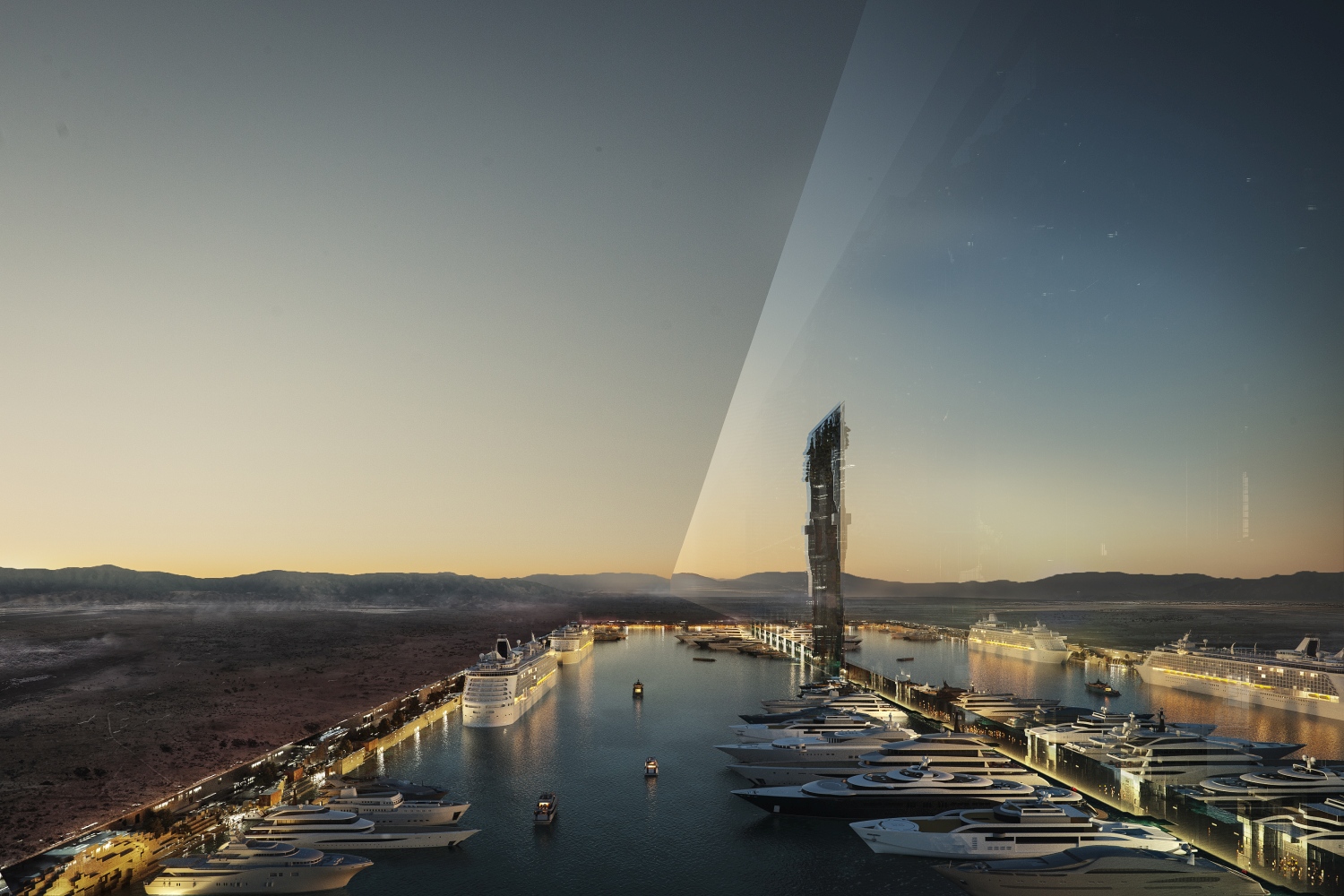 Unsurprisingly, luxury elements are part of the plan, such as here at the marina by the Red Sea. © NEOM

For the tourism, it's not an irrelevant development. After all, 50 luxury resorts are already planned on the sandy beach coast at one end of THE LINE. Five million tourists are expected in 2030 alone. But that's not all – they plan to build 50 artificial islands in the Red Sea. 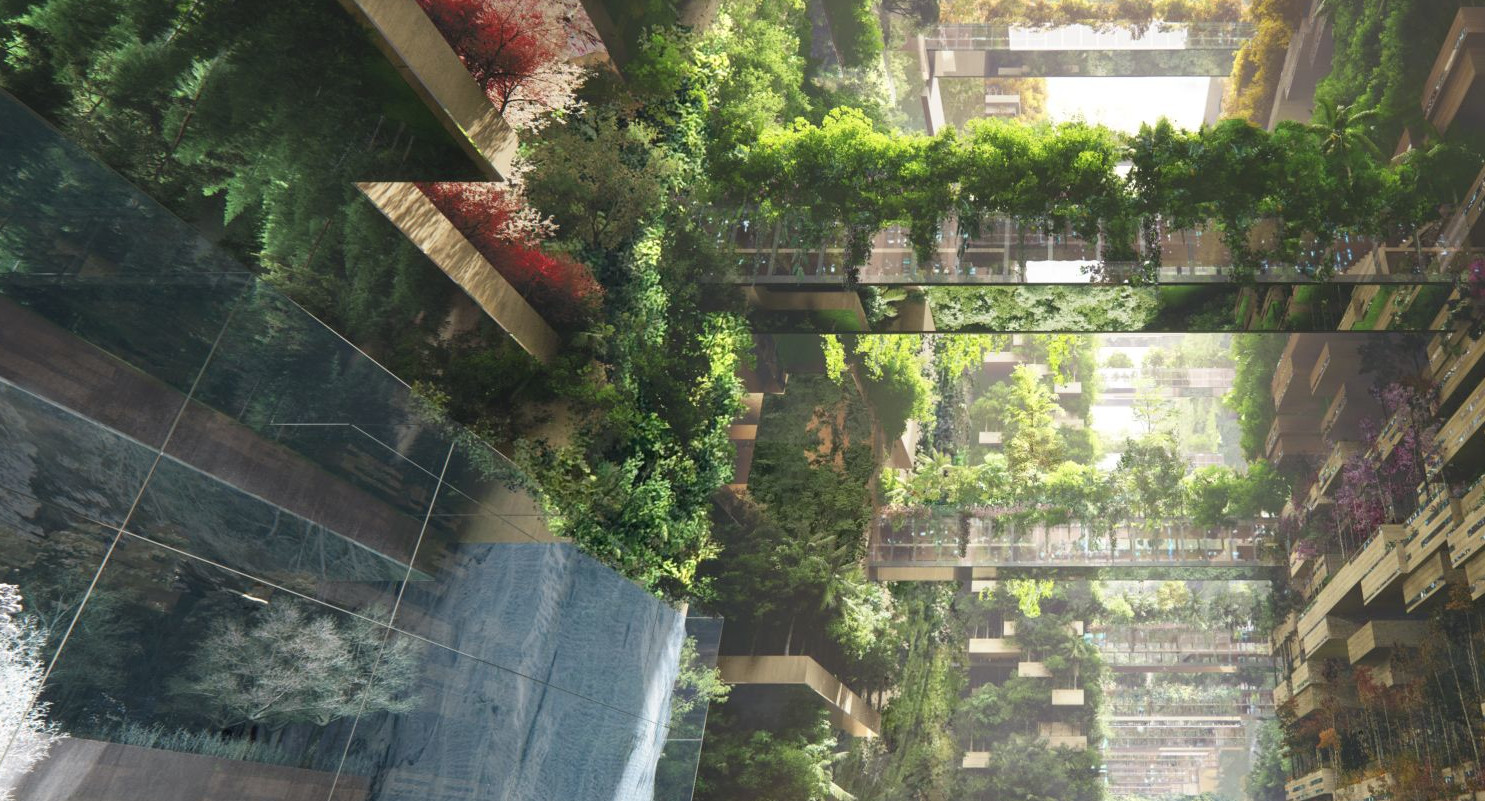 A peek inside the project – and into the future? It's supposed to be lush and green beyond the mirrored exterior. © NEOM

Of course, a plan like this is not without controversy. Opposing voices come from residents of the region, for example. They are being driven out of their homes to accommodate the construction. How environmentally compatible the project will ultimately be, remains to be seen – if it's ever realized at all. The project is still looking for investors, equity capital and qualified workers. But if THE LINE succeeds, it will mark a shift for the future of urban development.