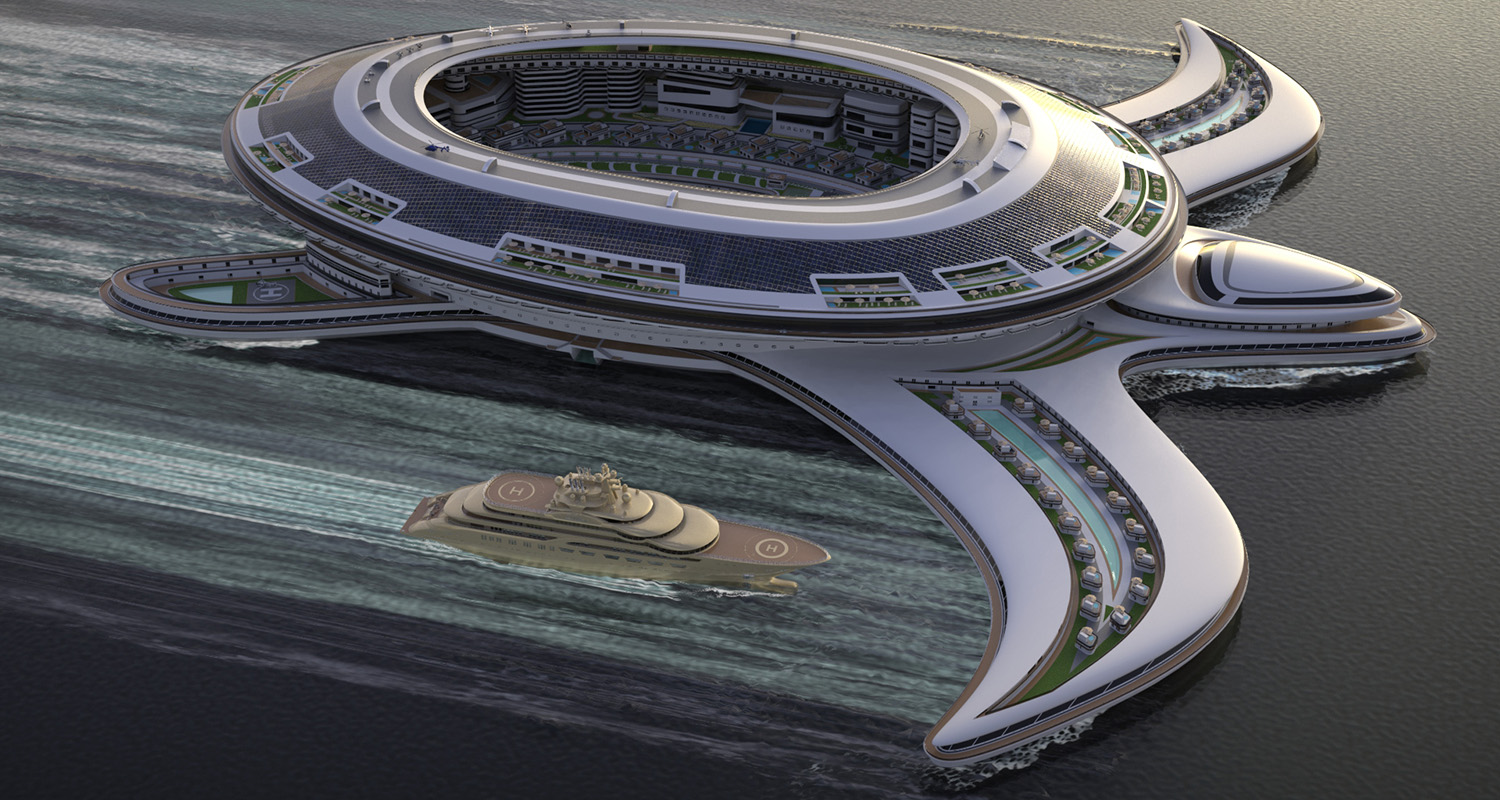 The design of the world's largest cruise ship has the industry talking: the floating city's construction is expected to cost $8 billion.

The Titanic and Michael Ende's Morla, the Ancient One look puny in comparison: the Italian design studio Lazzarini is currently causing a stir with its turtle-like design for the world's largest, electrically powered cruise ship. In reference to the supercontinent Pangea, the ambitious project is appropriately named Pangeos. Whether the luxurious turtle will become reality, however, remains to be seen. The Terayacht's construction requires a whopping 8 billion dollars. 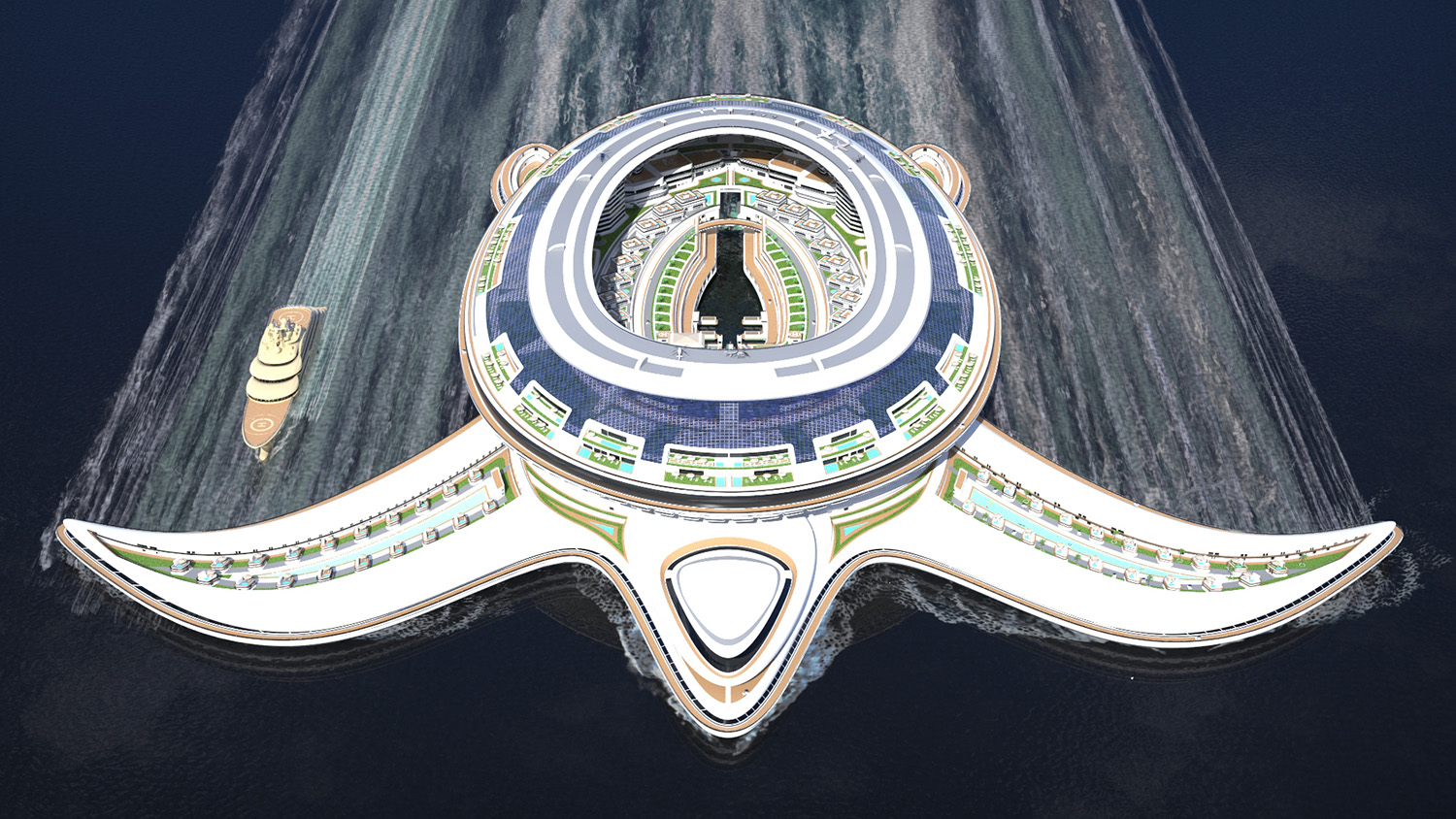 Should Pangeos come to fruition, the luxurious terayacht will cruise the world's oceans in the shape of a giant turtle. © Lazzarini Design Studio

Lazzarini's terayacht is to be 550 meters long and 610 meters wide. On deck – should the ship actually be built – there will be no cabins, but entire residential buildings, including terraced villas, private homes and buildings with rooftop terraces. The design also envisions hotels, a main square and landscaped parks – yes, even dedicated harbors for ships and aircraft. Thus, Pangeos will resemble a floating city rather than just a yacht. In total, the giant ship is said to accommodate around 60,000 people. 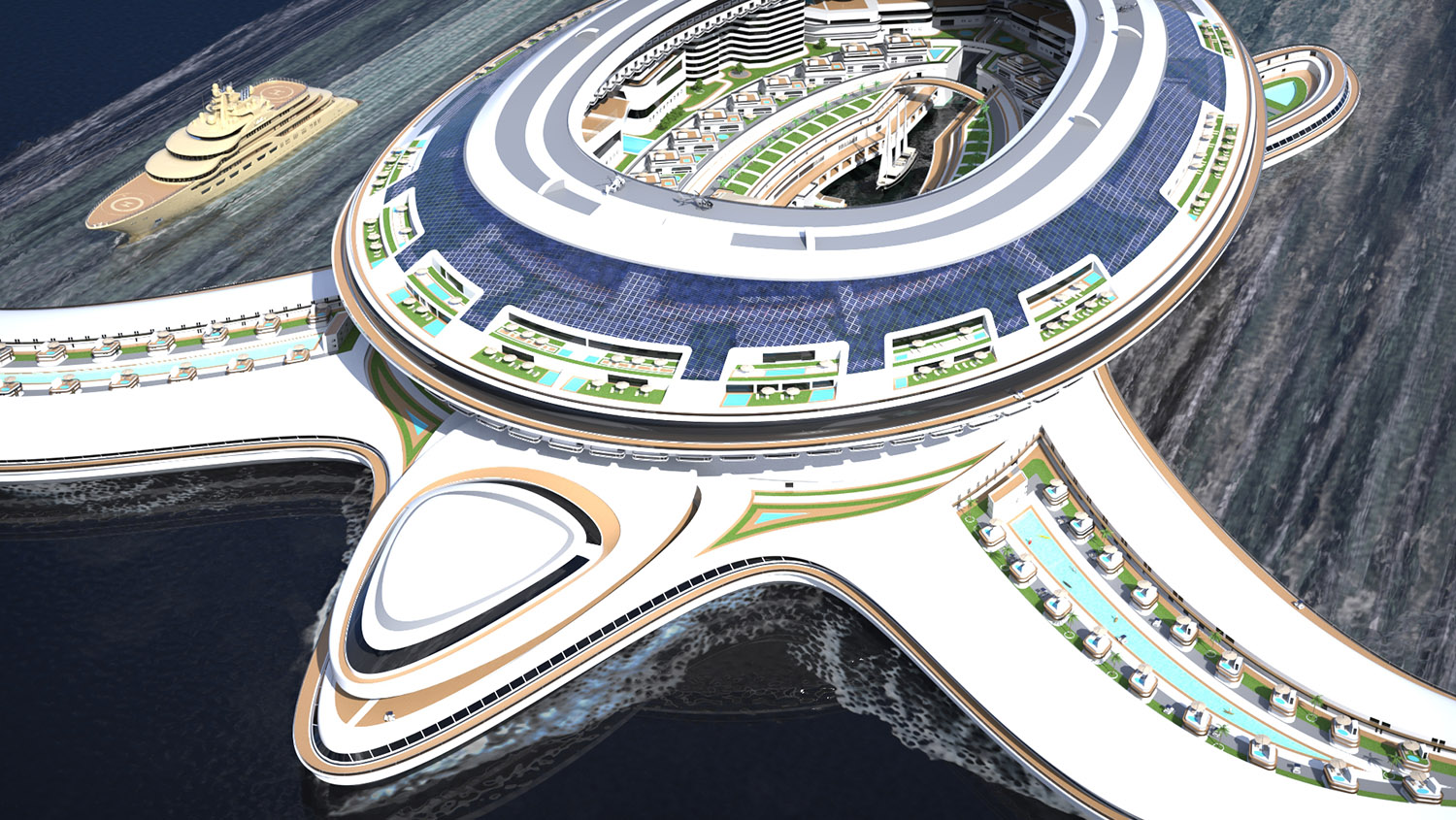 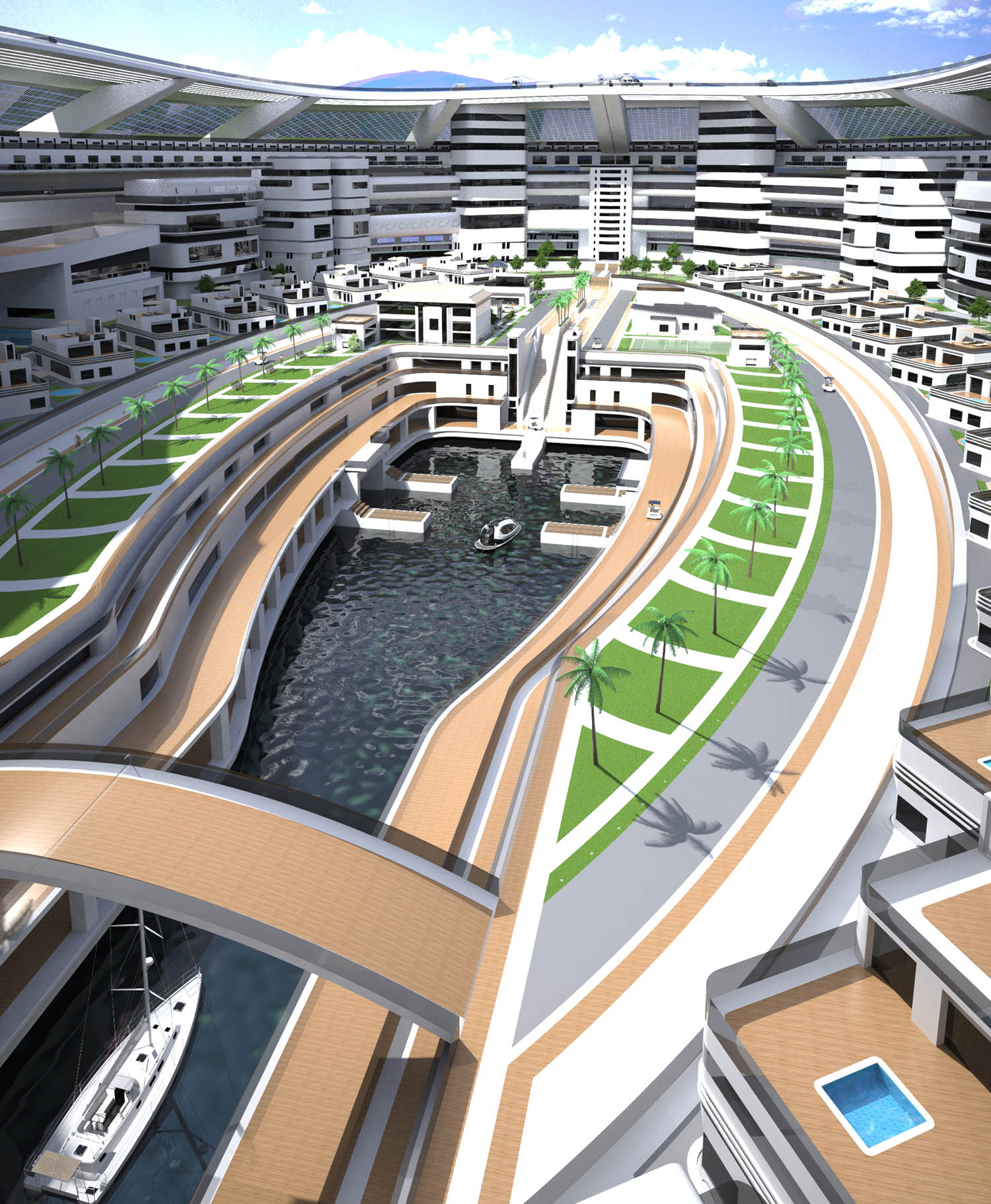 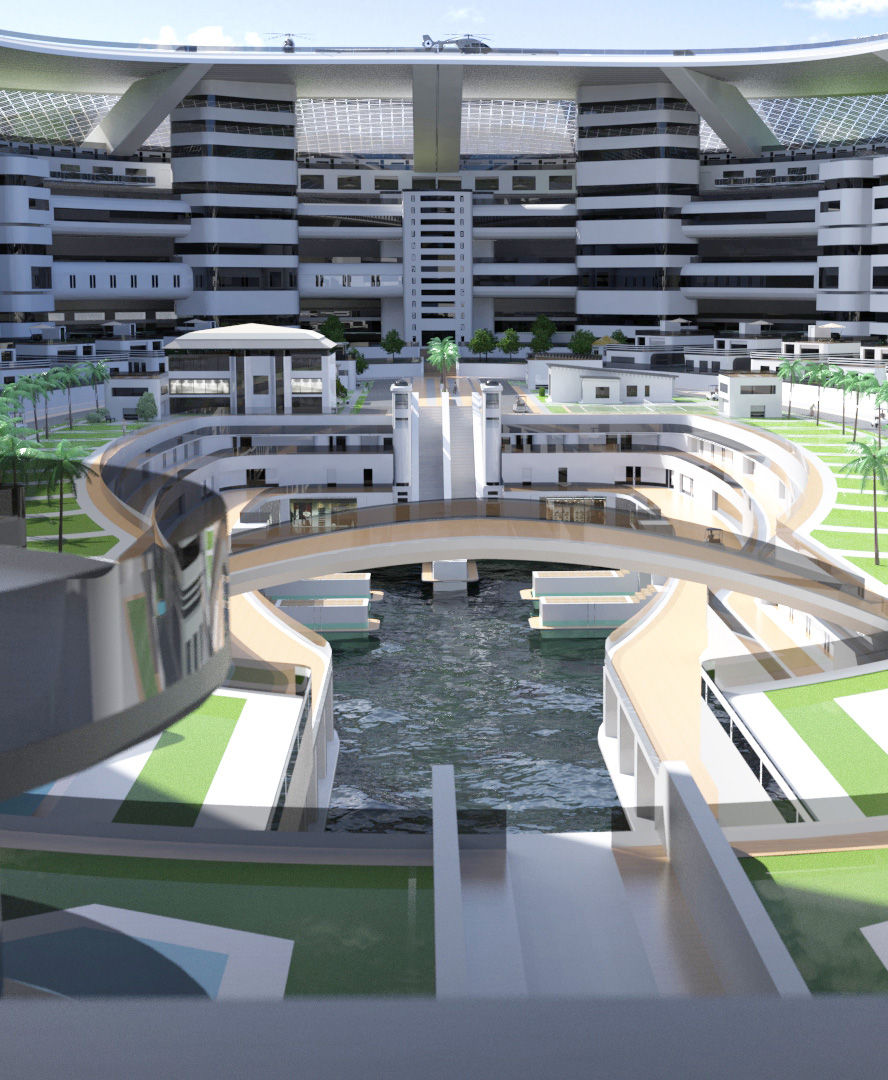 The journey is the destination: the Pangeos appropriately got the moniker "traveling, floating city". © Lazzarini Design Studio

The design of the "traveling, floating city," so the official nickname of the Pangeos, is complex. The hull, consisting of nine different bows divided into several blocks, is designed to keep the boat afloat with a draft of 30 meters. To ensure that the terayacht cannot sink, the lower space houses 30,000 cluster cells. 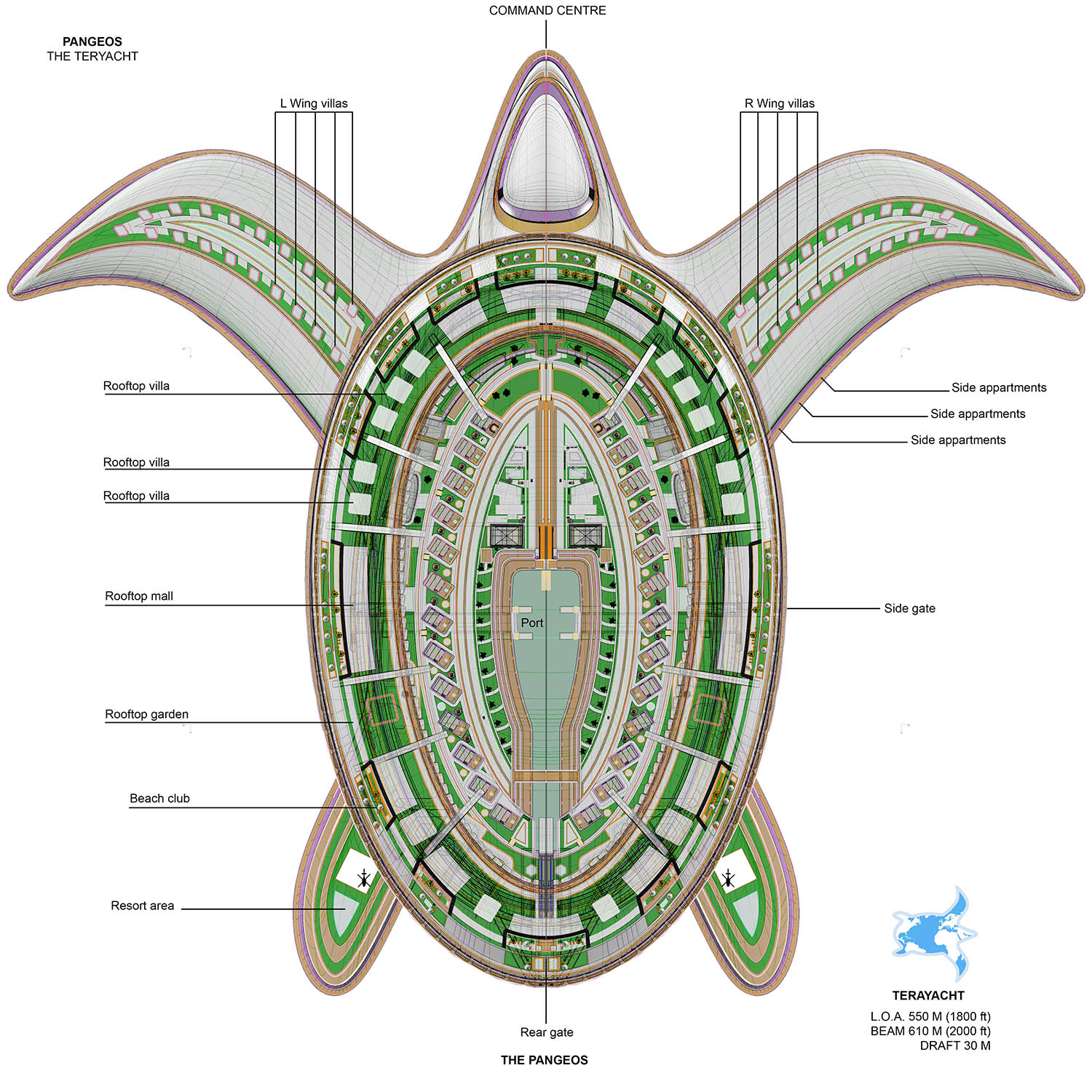 The plan for the terayacht is extremely ambitious – it even includes hotels and parks. © Lazzarini Design Studio

Propulsion is provided by nine HTS engines, each of which is 16,800 hp. These are supported by huge sails and solar panels on the roof of the yacht. This way, Pangeos will be able to cruise the world's oceans at around 5 knots.

Funding for the turtle

Whether the terayacht will actually set sail remains to be seen. There is still no shipyard that meets the requirements for building the gigantic ship, which Lazzarini estimates will take 8 years. The designer's hopes are pinned on the construction of a terayacht shipyard in Saudi Arabia, as this would provide the space with direct access to the sea. 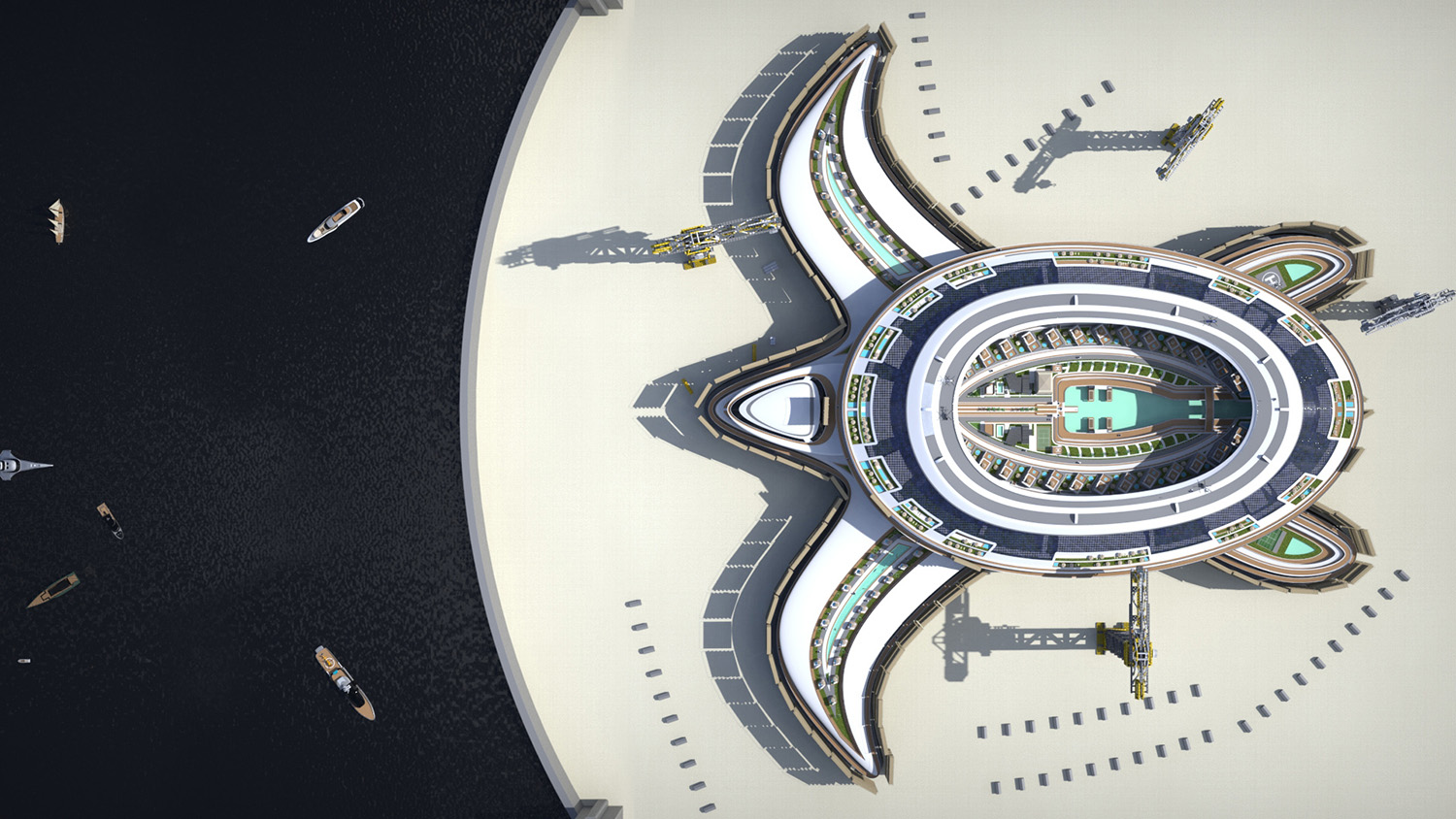 The construction of the terayacht will require a gigantic shipyard, which currently does not exist. © Lazzarini Design Studio

It's scheduled for construction in 2033. By then, the funding – which, as we mentioned, will cost a whopping 8 billion dollars – should also be in place. Anyone who wants to get involved now can support the project via crowdfunding. Goodies include virtual tickets and VIP apartments or NFTs.