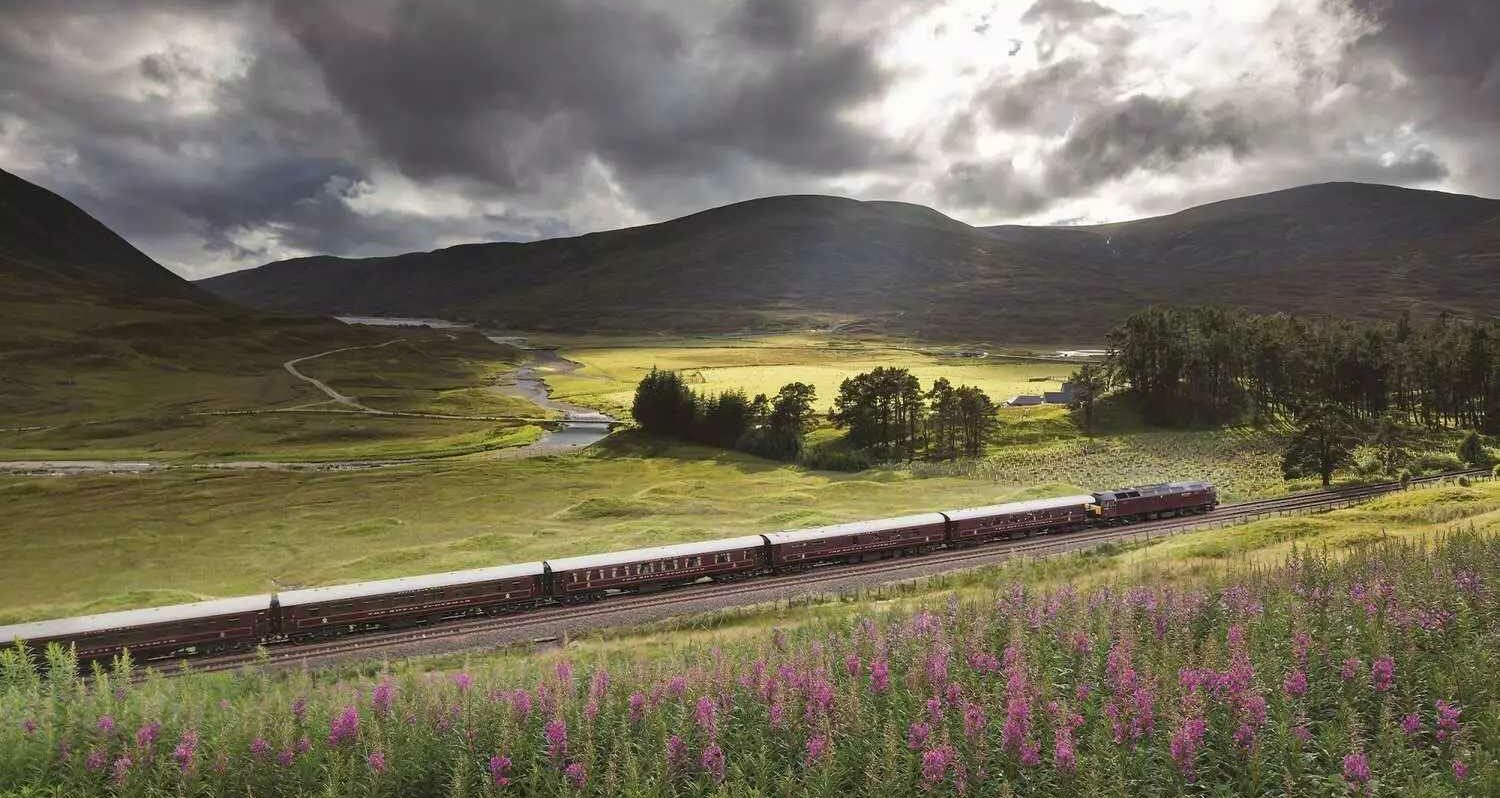 Once in a Lifetime

Whether it's an extraordinary destination or a unique form of travel - everyone wants to fulfil their long-awaited travel dream once in their life. A trip on one of the world's most legendary luxury trains is at the top of many people's wish lists. Due to the Corona Crisis, many things did not go as planned this year - so a trip on the Venice-Simplon-Orient-Express or the Golden Eagle in 2021 would be the perfect way to leave the pandemic year behind. The Rail adventure travel specialist Ameropa therefore presents six of its luxury train journeys around the world that are truly unique.

Once built for the English royal family to travel from Calais to the Côte d'Azur, the luxury train El Tren Al Andalus now makes its way through the Spanish countryside from Seville to Granada to Córdoba. Its spacious and glamorous interior with fine fabrics and dark wood resembles a palace from the Belle Epoque - including old relics from its year of construction 1929. In four saloon cars passengers enjoy haute cuisine or try a refreshing drink at the bar. The seven sleeping cars with 32 suites promise not only state-of-the-art comfort and excellent service, but also air conditioning and private bathrooms. During the stopovers, city tours, wine tastings and explorations of the varied surroundings are on the agenda. El Tren Al Andalus is also adding a new route to Portugal this season. The journey goes from Seville to Porto or vice versa. 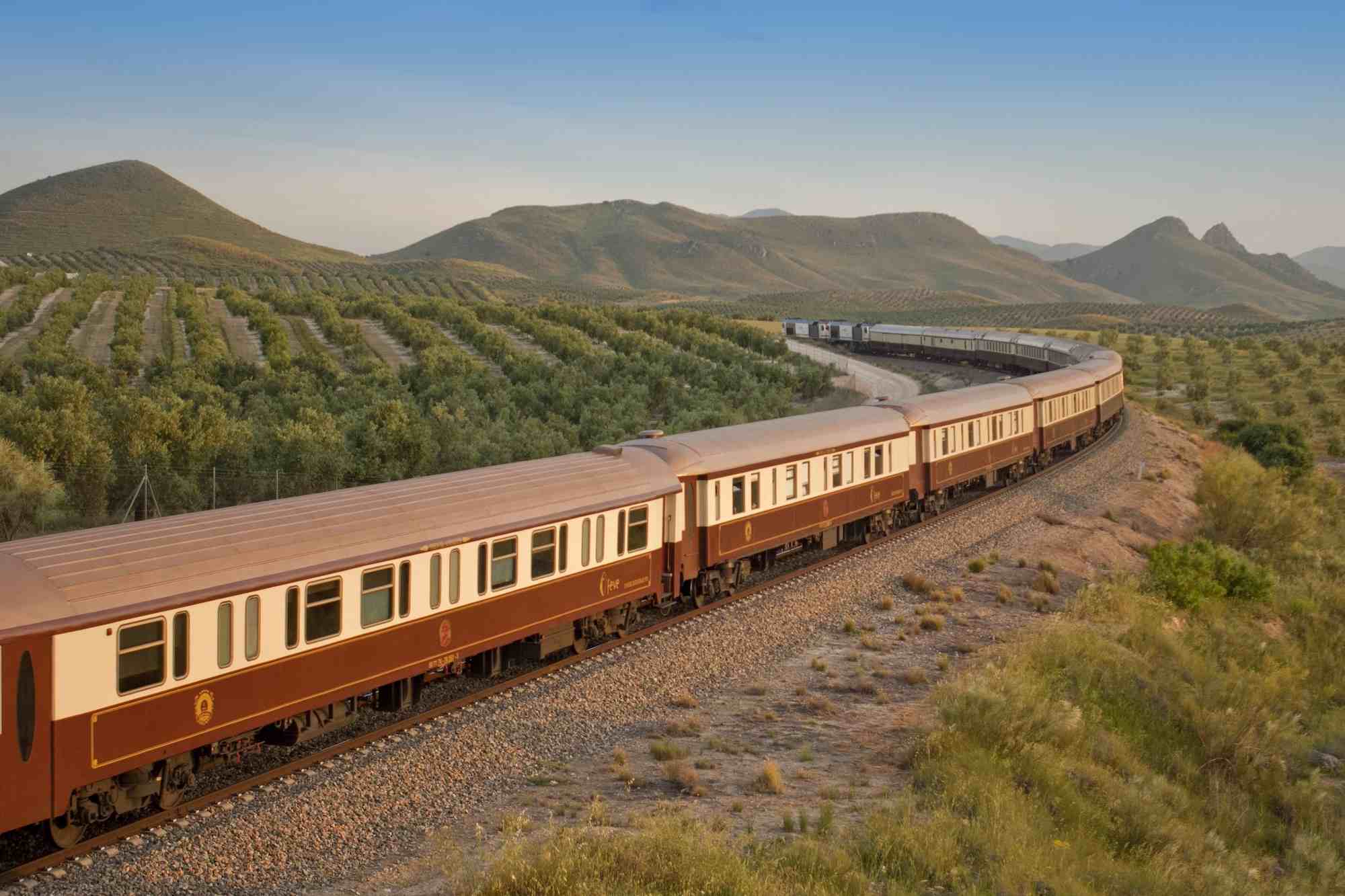 Once in a lifetime a ride on the famous Venice Simplon-Orient-Express: The rolling legend is one of the most famous trains in the world and has been since 1883. On board: a luxury never seen before at that time and the novel combination of travelling and sleeping. In the 1920s and 1930s, more and more aristocrats, film stars and celebrities discovered the extraordinary amenities of the unique train. Even today, the royal blue and gold carriages enchant with their historic charm of elegant art deco interiors, sparkling crystal and polished wood. For once, feel part of the grandiose setting of "Murder on the Orient Express" and feast your way through the excellent menu - on a train that still makes history today. Attentive cabin stewards look after guests, who can board in Berlin, for example, and travel via Paris to London. The route can also be booked in the opposite direction. 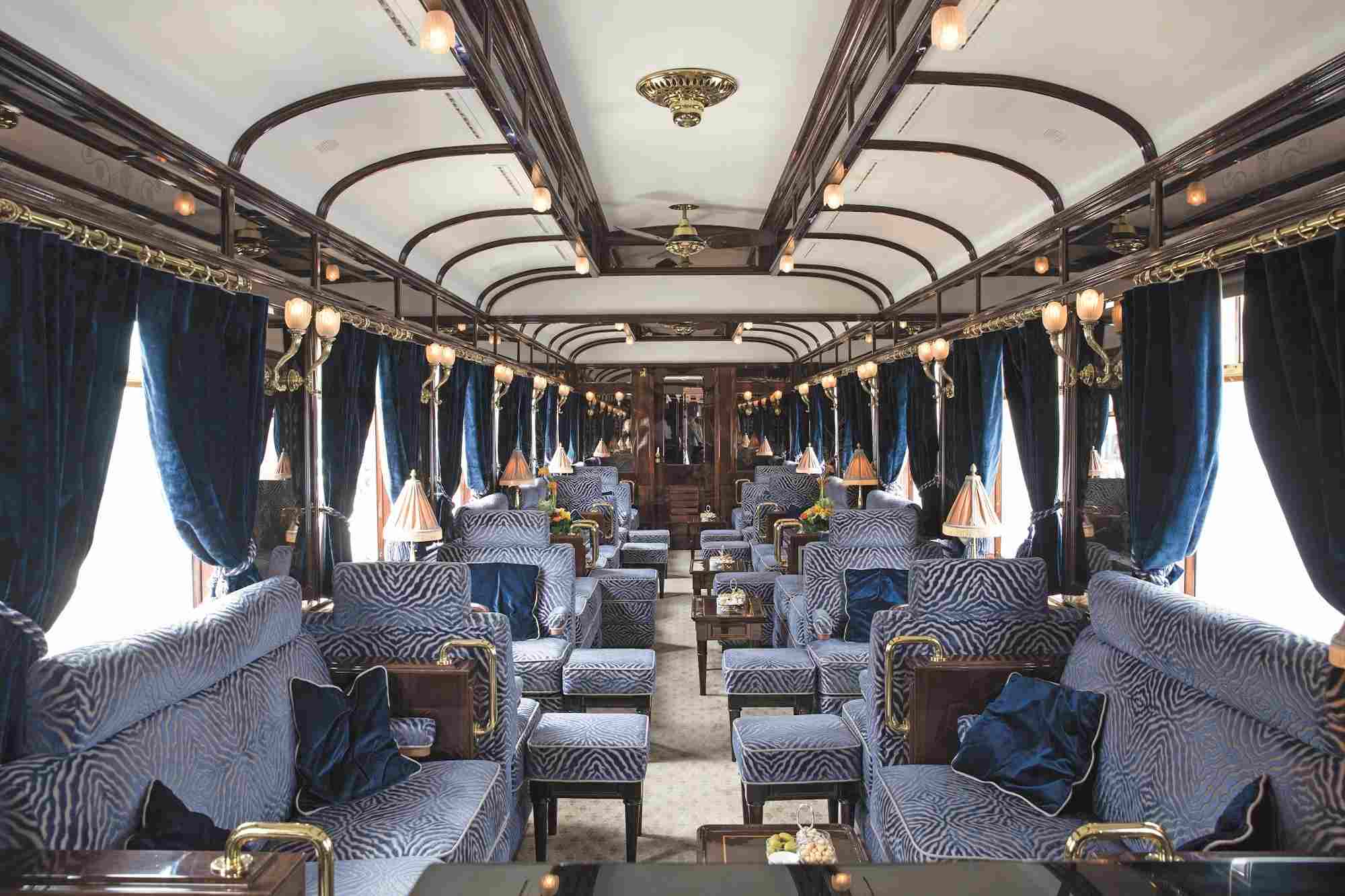 The Venice Simplon-Orient-Express is a rolling legend - since 1883.
3

The Golden Eagle Arctic Explorer provides an impressive contrast between Russia's majestic cities and the vastness of the mystical Arctic Circle. The carriages of the modern luxury train all have their own bathroom - the highest class of carriages, the Imperial Class, promises the highest level of comfort. The Golden Eagle Arctic Explorer travels via Murmansk to Kirkenes, where the starry night sky with its intensely coloured Northern Lights captivates everyone. While stargazing, an astronomer shares his extensive knowledge - optional snowmobile safari or dog sled ride is also available to go in search of the Northern Lights. A visit to the magical Snow Hotel outside Kirkenes is also on the agenda - welcome drink in the snow bar and hotel tour included. There are numerous ice sculptures and snow paintings by local and international artists on display. The heart of the Golden Eagle Arctic Explorer is the stylish restaurant car, where the chef surprises guests with varied menus during the journey. It is not for nothing that the train is nicknamed the "Indulgence Train". 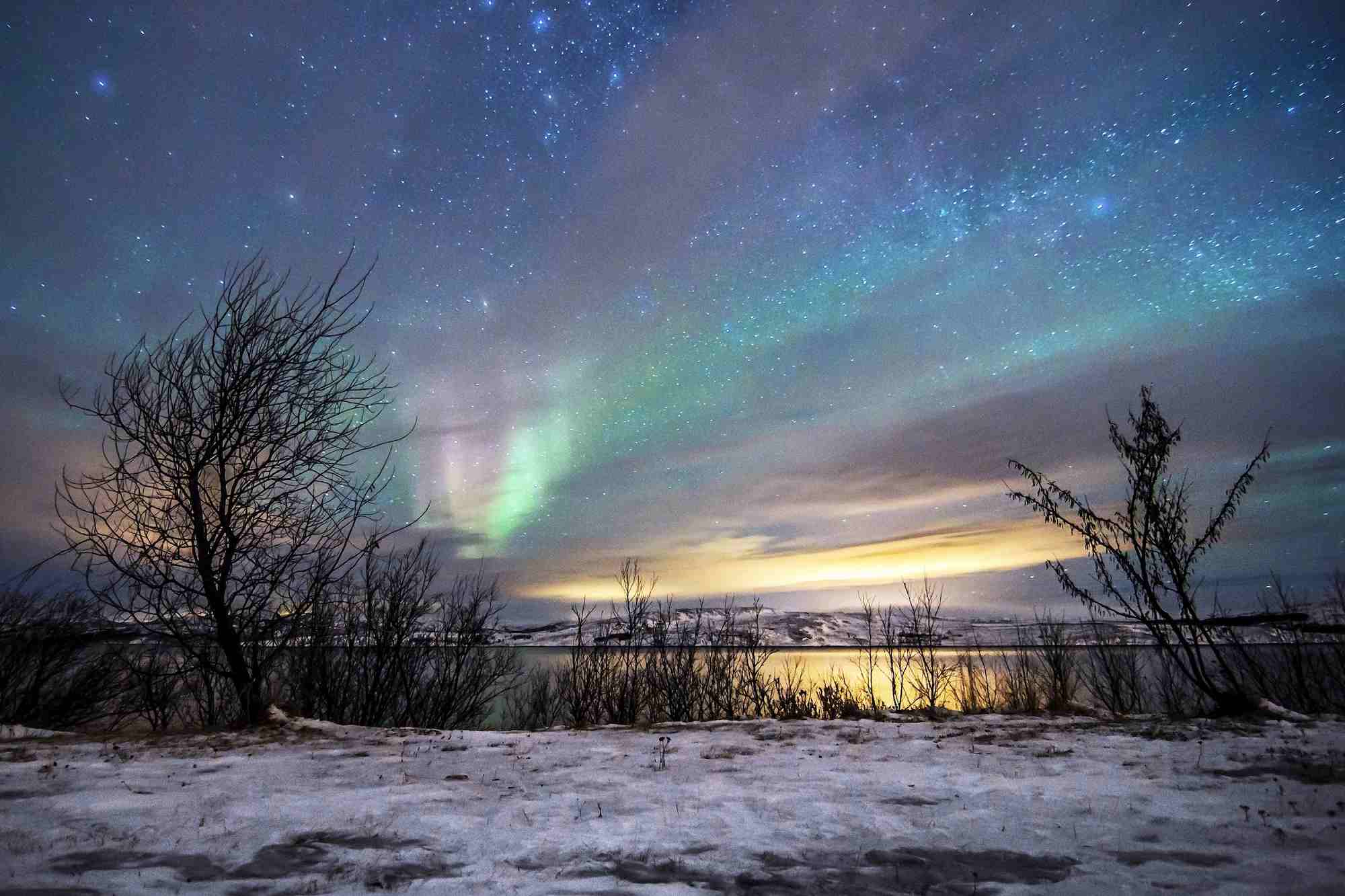 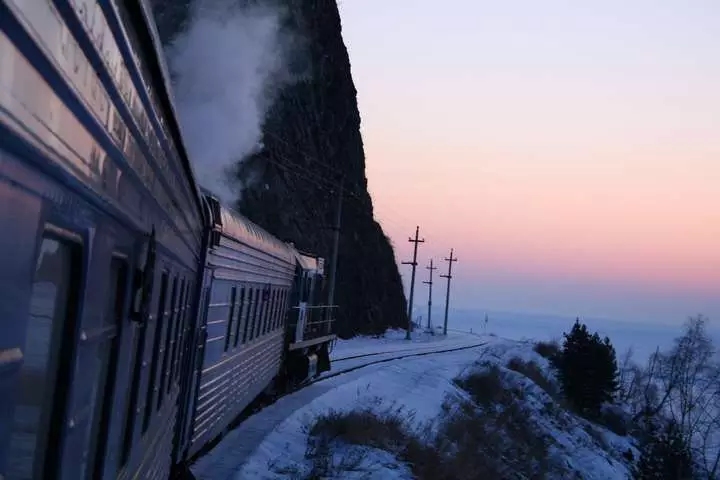 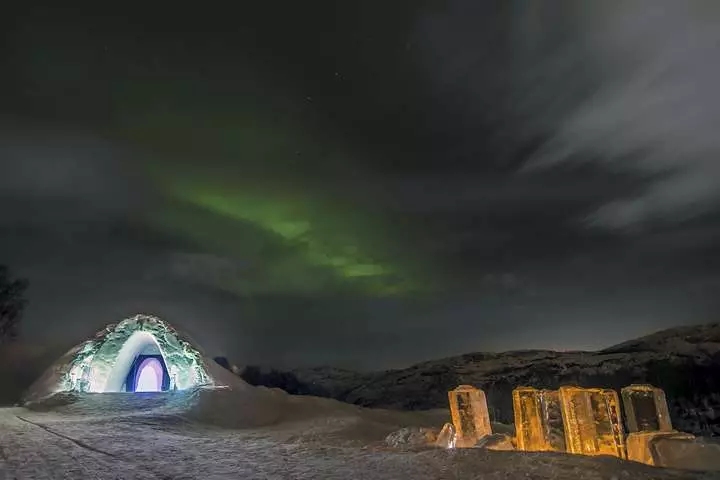 The trip with the Arctic Explorer is a particularly extraordinary experience. A visit to the magical Snow Hotel outside Kirkenes is on the programme as a stopover.
4

Experience the "white nights" in the land of the midnight sun: On a trip with the Golden Eagle, this dream becomes reality. From Moscow, the journey takes you deep into the Arctic Circle region. The luxury train journey combines incomparable cities, remote villages and tranquil forests, making it an unforgettable experience. Numerous unique photo opportunities await along the route. The highlight in St. Petersburg is the visit to the impressive Catherine Palace Pushkin including the Amber Room. In the birthplace of Russia, the city of Novgorod, the famous 11th century St. Sophia's Cathedral with its unique five domes is located in the Novgorod Kremlin. The journey continues to Murmansk, which lies halfway between Moscow and the North Pole, and to the city of Archangel on the shores of the White Sea, once the most important seaport of medieval Russia. The Golden Eagle will return to Moscow via Vologda and Yaroslavl. Guests booking the Imperial Suite benefit from a private car and their own tour guide on excursions to most locations. 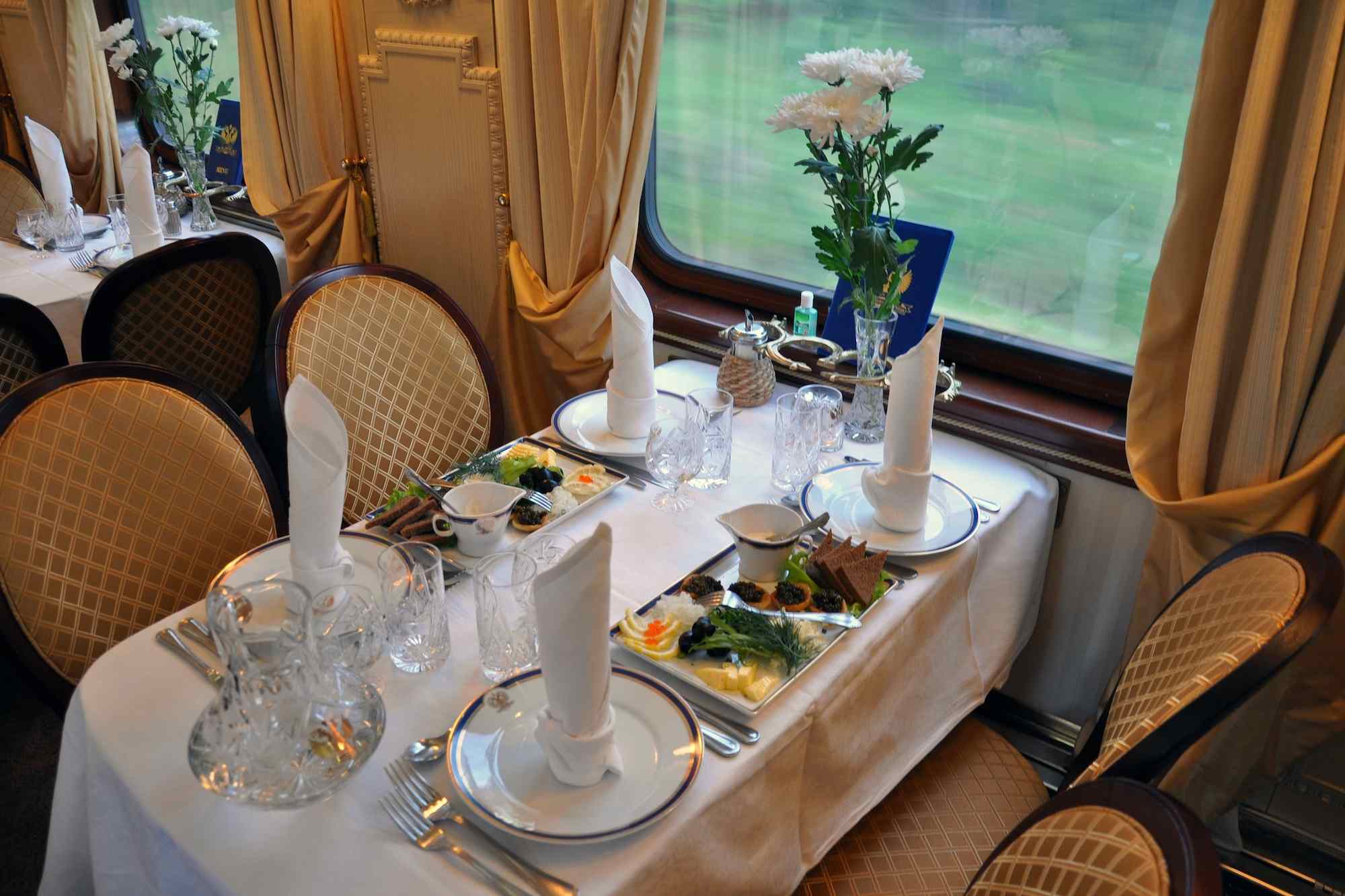 From Moscow, the Golden Eagle takes you deep into the Arctic Circle region.
5

The Belmond Royal Scotsman is one of the most magnificent nostalgia trains in the world. From Edinburgh via Glasgow and along the West Highland line, the luxury train runs through the heart of Scotland's wild landscape. Passing glens, lochs, moors and mountains as well as numerous castles and picturesque villages, the route is one of the most scenic in the world. Crossing the Glenfinnan Viaduct transports you into the world of Harry Potter, as the Hogwarts Express also crossed this passage. The aristocrat among trains, honored by the Queen herself, offers historic-looking dining cars and an "Observation Car" with a bar and open veranda, as well as a library. The luxurious cabins are furnished with precious mahogany wood. All excursions, food and drink are included on this cruise - and it wouldn't be Scotland if there wasn't an impressive selection of whiskies to choose from on board. Relaxation is provided by the - Spawagon with numerous treatment options, and the Belmond Royal Scotsman stops for the night on a special track or in the station. 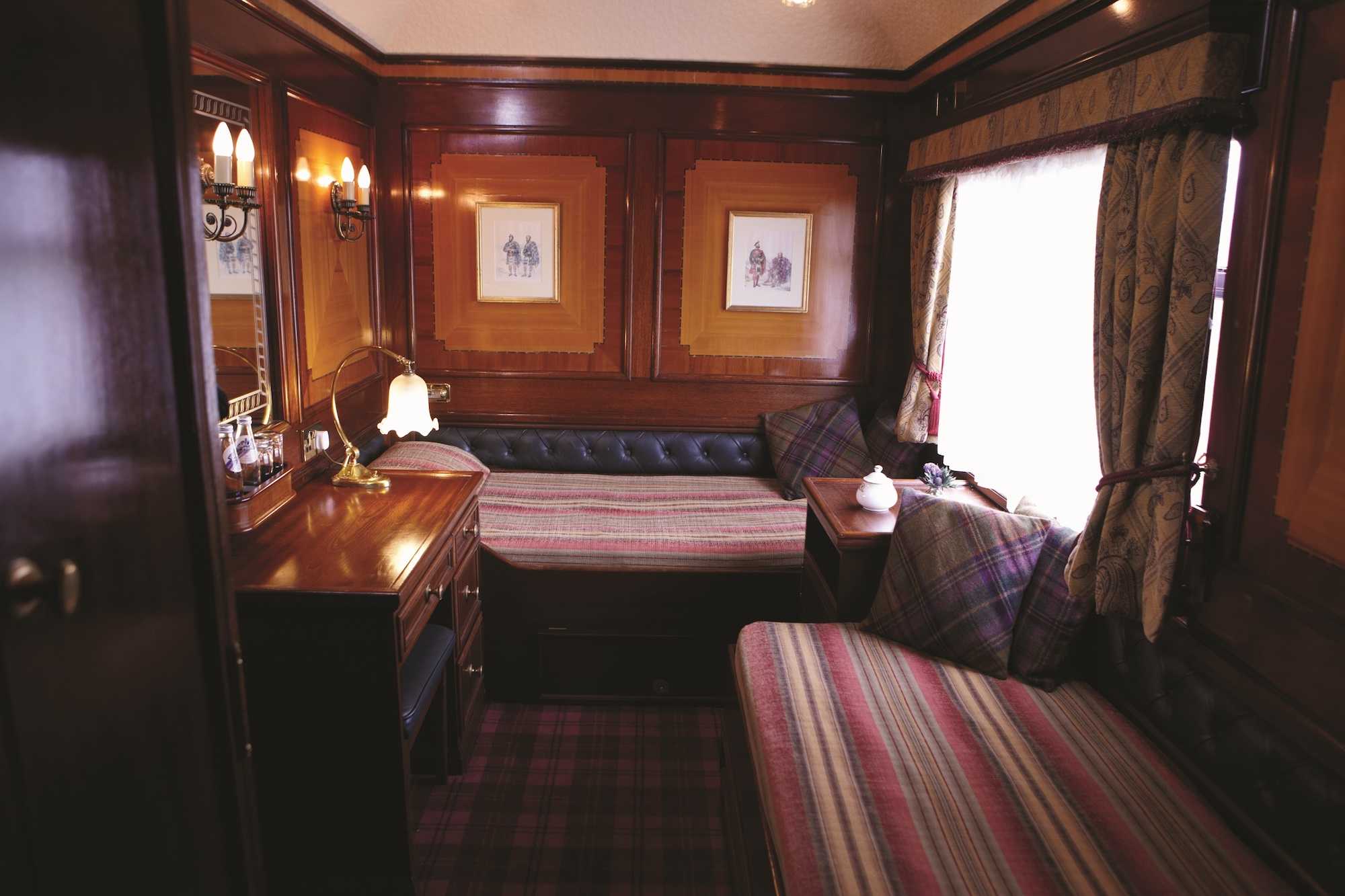 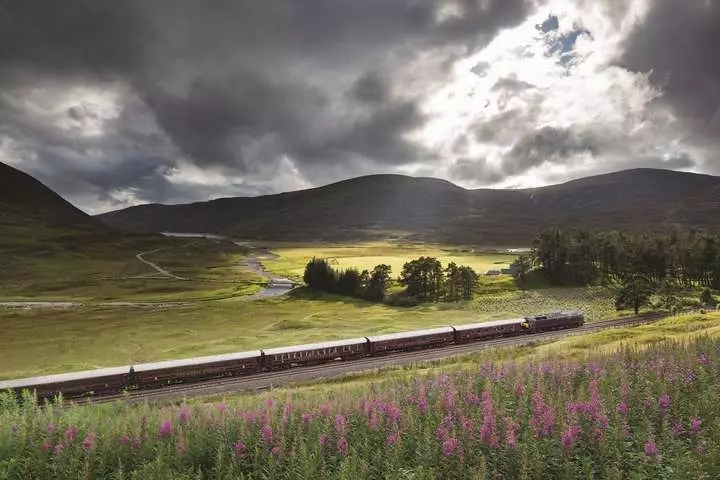 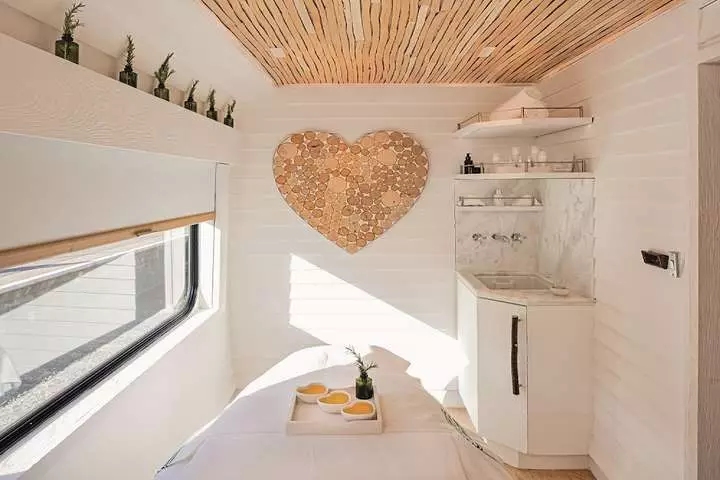 Crossing the Glenfinnan Viaduct transports you into the world of Harry Potter, as the Hogwarts Express also crossed this passage. The luxurious cabins are furnished with precious mahogany wood.
6

Many people dream of a ride on the "slowest express train in the world". The Glacier Express is one of the classics among panoramic journeys and is already celebrating its 90th anniversary this year. On its way through three cantons from St. Moritz to Zermatt, the train crosses 291 bridges, passes through 91 tunnels and masters a difference in altitude of 1,500 metres. From St. Moritz to Thusis, the Glacier Express travels through the Albula Valley - a section of the Rhaetian Railway that UNESCO inscribed on the World Heritage List in 2008 along with the Bernina line. The more than 100-year-old railway line is a masterpiece in terms of construction technology and routing. The new Excellence Class, the premium car class of the Glacier Express, offers excellent service. A concierge takes care of the well-being of the maximum of 20 passengers - from the reception to the service of the meals to the appropriate drink at the bar. Included is an exquisite five-course menu prepared directly on board using fresh and predominantly local produce. The comfortable lounge seating with guaranteed window seat for every passenger offers unrestricted views of the spectacular Swiss mountains. Particularly exclusive: only Excellence Class customers have access to this carriage. 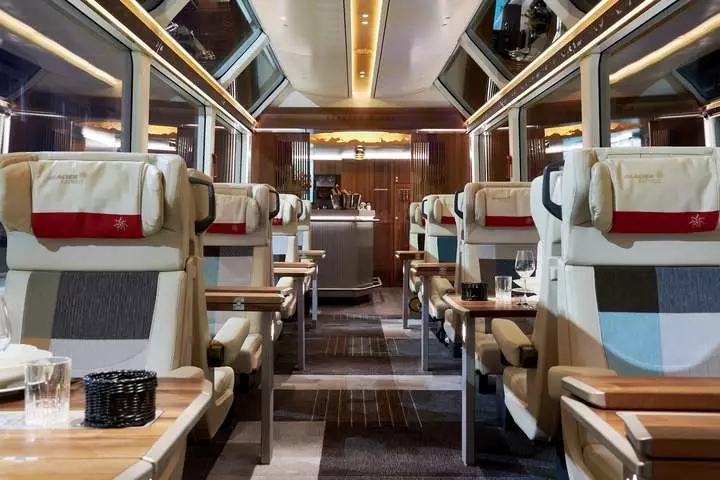 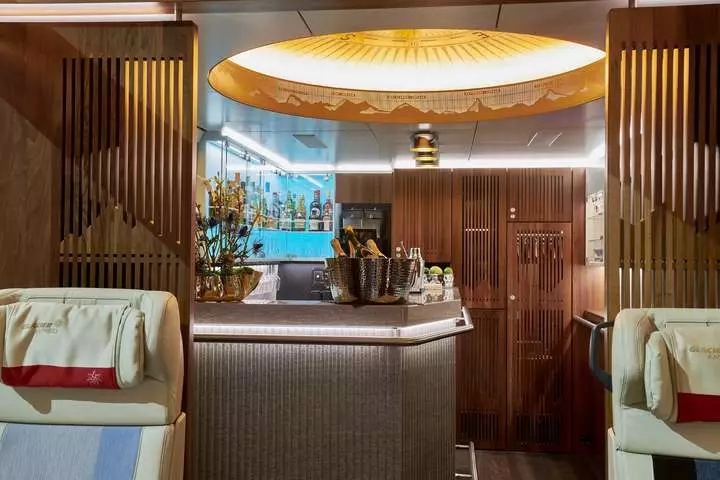 A concierge looks after the well-being of the maximum of 20 passengers. The new Excellence Class, the premium car class of the Glacier Express, offers excellent service.