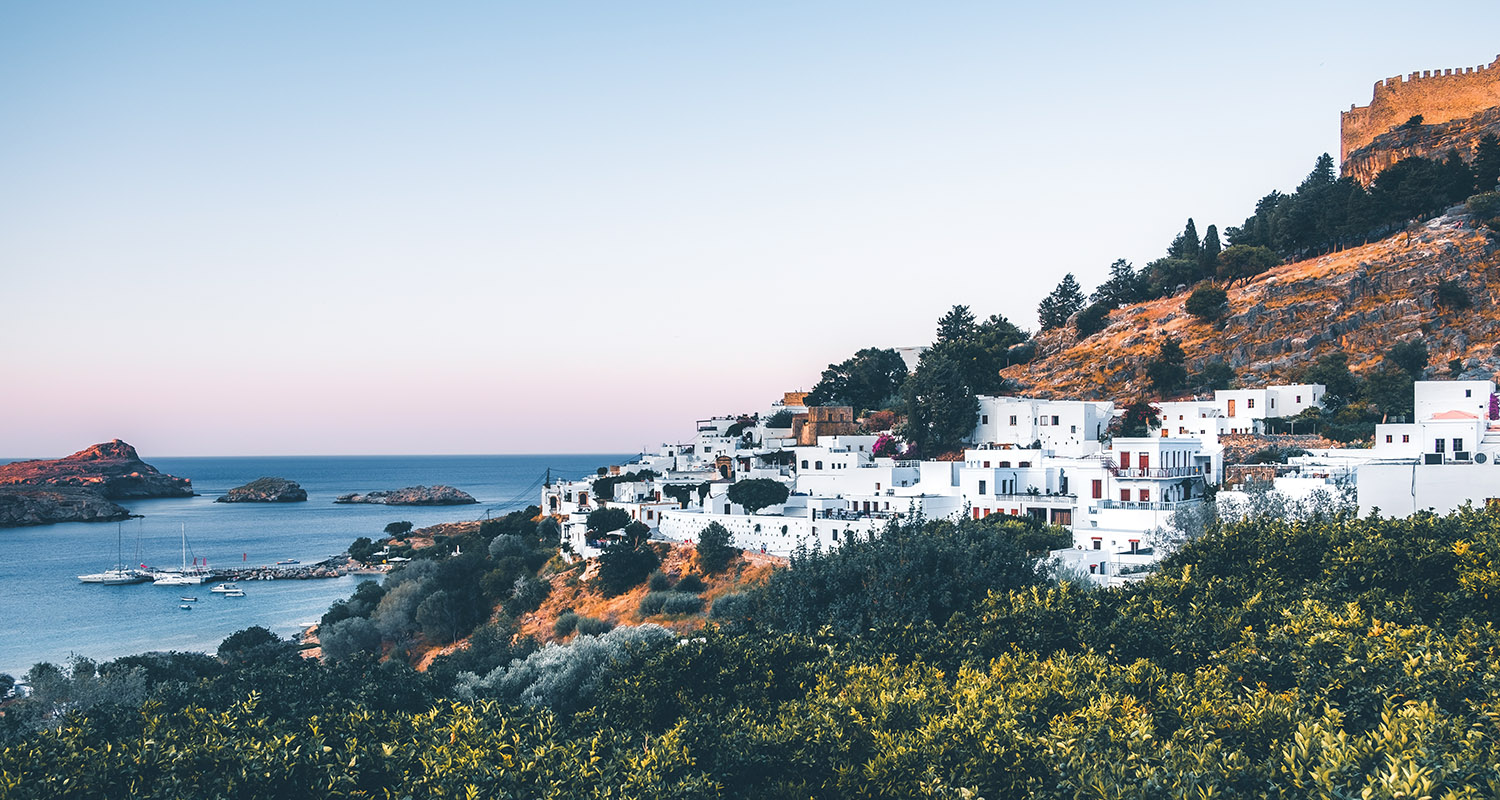 Off to Rhodes: Where to Go and What to Do on the Dreamy Greek Island

Thousands of years of history, numerous dream beaches, crystal clear waters and up to 3,000 hours of sunshine per year: Rhodes beckons with blissful vacations all the way through October. These are the absolute highlights on the island in the east of the Aegean Sea.

On the Dodecanese island of Rhodes, covered in oleander and hibiscus, the present and the past go hand in hand: in the capital, the cobblestones of the medieval old town tempt visitors to take long walks through the history of the past centuries. Eastern and Western influences have left their marks in equal measure. Follow the traces of history and discover the Palace of the Grand Master of the Knights of Rhodes as well as Turkish and Italian buildings. 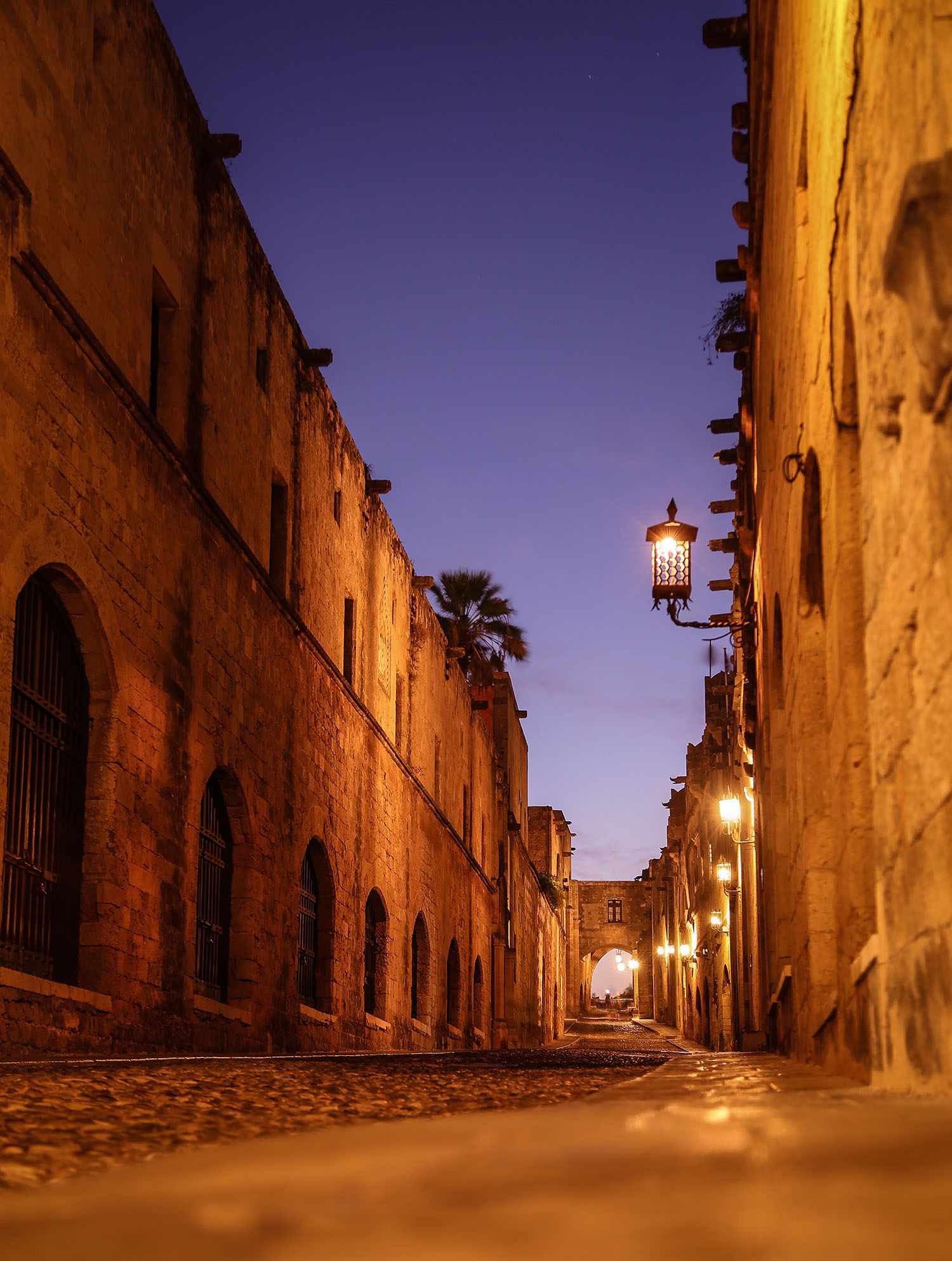 The old street of the knights (or Odós Ippotón) used to be the quarters of the crusaders. © Gennadi Grand Resort

Rhodes isn't just for culture aficionados, sun worshippers will also feel right at home here: the island is one of the sunniest areas in Europe and trumps with dreamlike golden beaches. Those who want to surf with the wind will find perfect conditions from July to September. Even fresh springs bubble up from the depths of the earth in the island's interior.

Best time to visit: June to October
Flight duration: 3h 15m from Frankfurt, 2h 30m from Vienna
Sunshine hours: average 7.6 hrs, up to 12 hrs per day in summer
Good to know: the official heraldic animal of Rhodes is the leaping stag. In fact, the animals still live on the island – be sure to drive carefully at night! 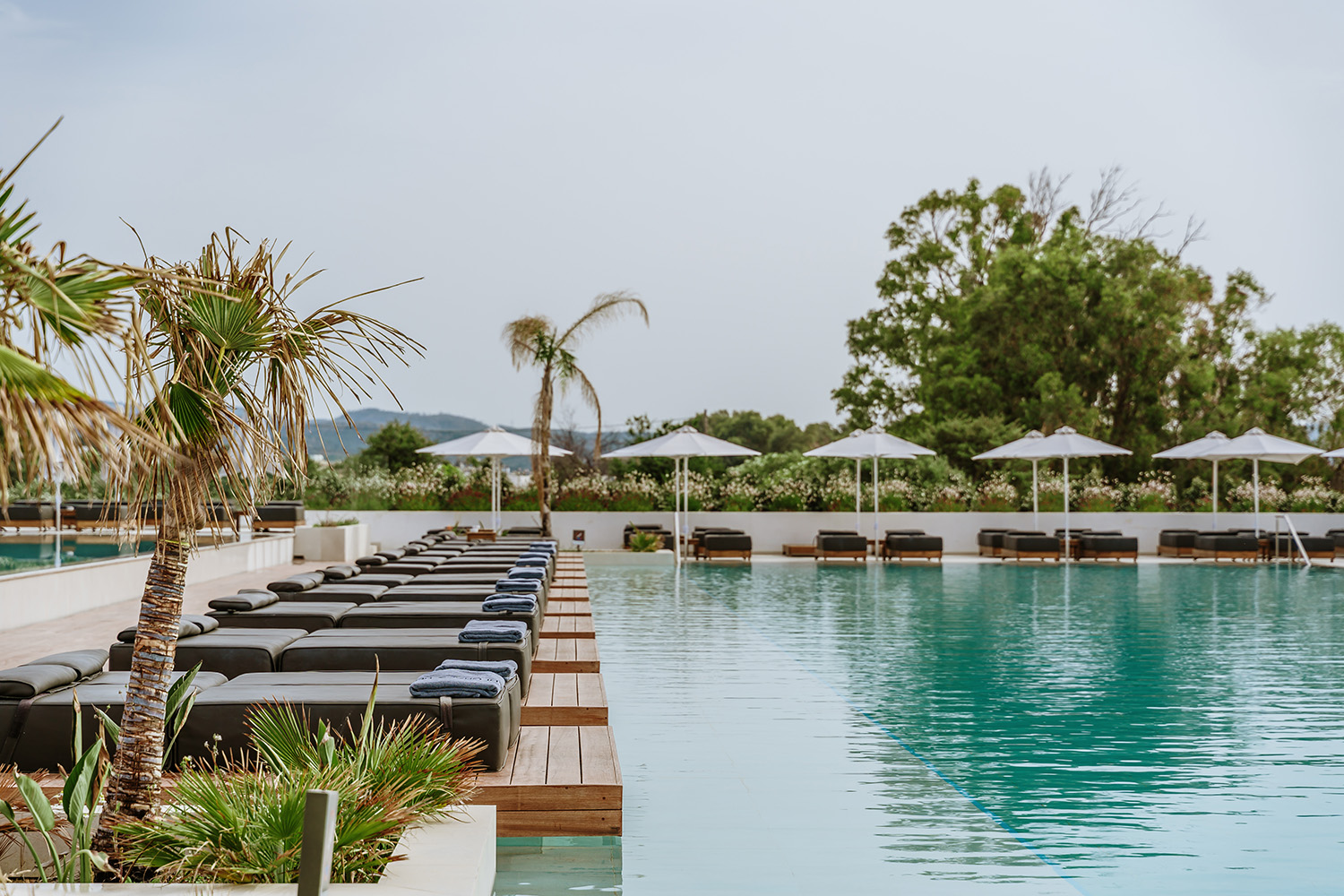 Mediterranean elegance: the Gennadi in the south of the island offers countless quiet spots – and there's always a lounger available by the pools. © Gennadi Grand Resort

Rhodes may be a small island, but it still offers a good selection of excellent hotels. If you'd rather reside in the north, near the capital, book a room at the Rodos Park. The elegant five-star hotel is nestled in fragrant green gardens and boasts an outstanding spa and great culinary offerings.

The Marco Polo open-air restaurant in the vibrant heart of Rhodes is a real godsend for those who happen to stumble in and grab one of the coveted tables. In a cozy and stylish ambience, the restaurant serves excellent Greek-Mediterranean cuisine with a modern touch.
marcopolomansion.gr

It's worth booking a table at MYTHOS for the view of Lindos harbor alone. The all-day restaurant uses local products – such as meat from its own farm in Lardos – to create excellent organic Greek and Mediterranean fare.
mythoslindos.com

10 highlights you must see in Rhodes

If you want to do more than just relax by the water and fill up on vitamin D, you can go on a voyage of discovery. Rhodes has a lot of history and cool sights to offer, ensuring there's never a dull moment on the Dodecanese island. 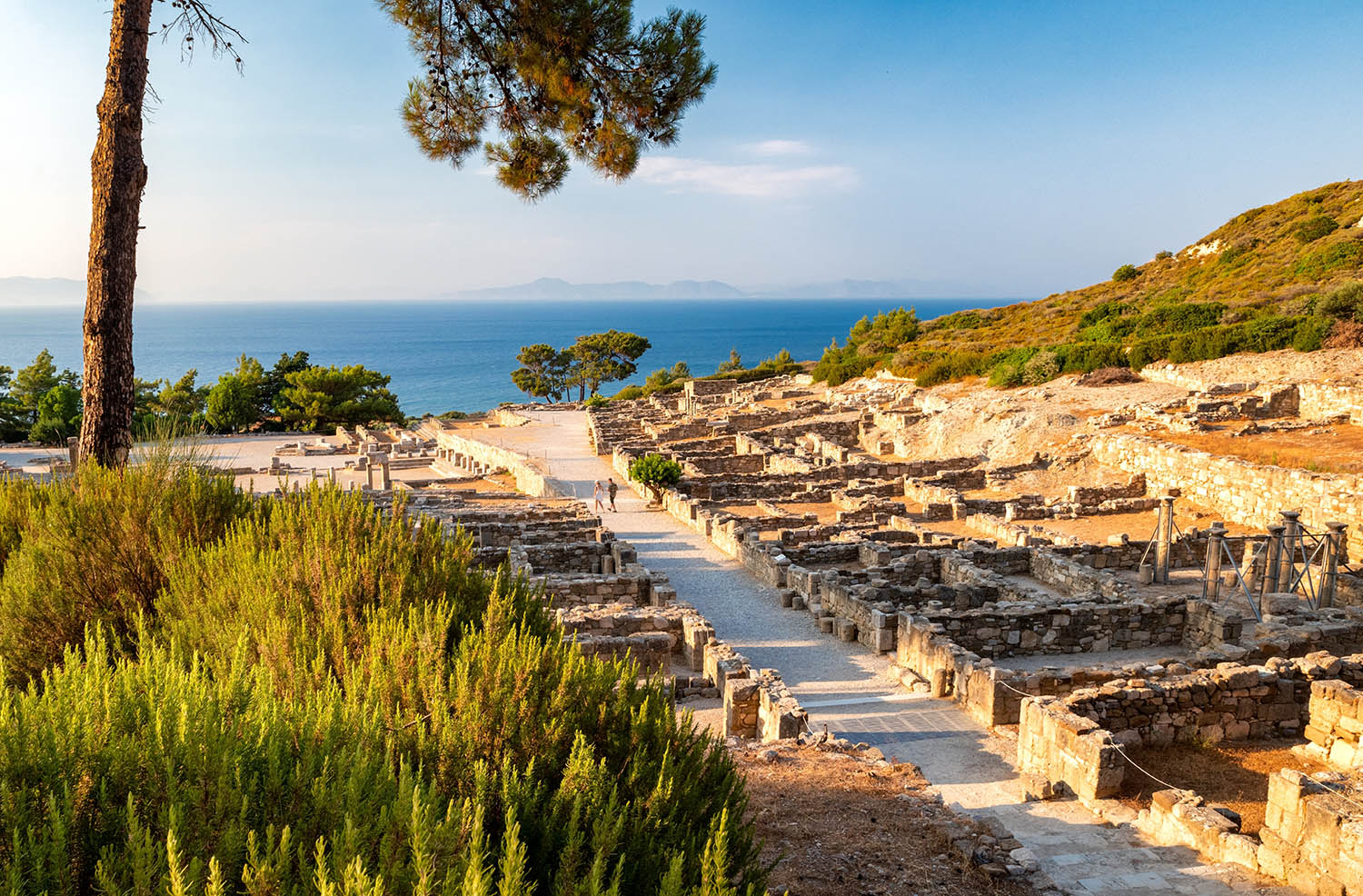 Kameiros was the first important settlement on the Dodecanese island. © Shutterstock

Before the foundation of Rhodes Town, Kameiros was the center of the islands. Even today you can see the remains of the former Mycenaean settlement: the ruins with remains of a temple, Doric columns and ancient terracotta pipes and residential quarters are located in the northwest of the island, at the foot of Mount Akramytis. 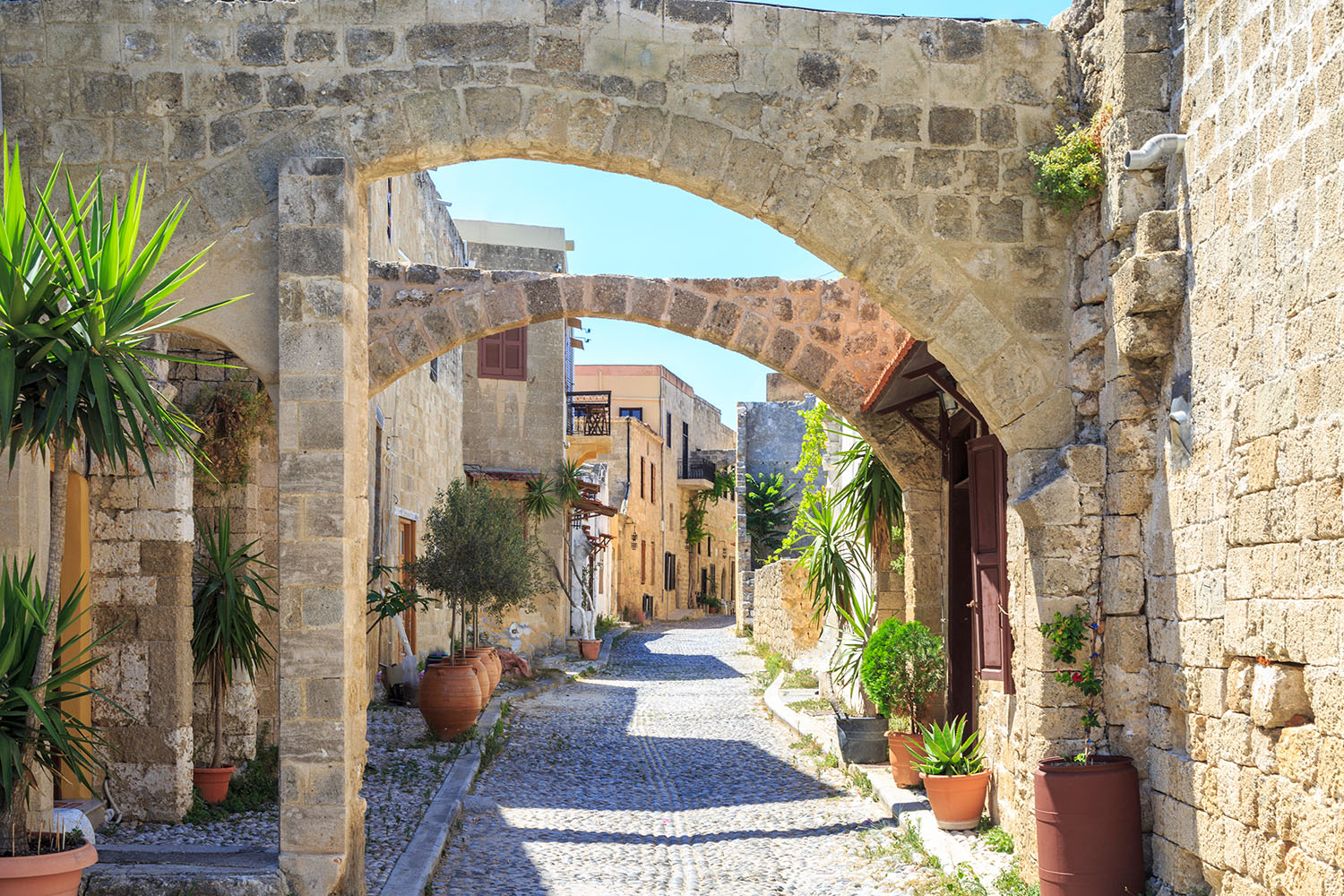 Between Islam and Christianity: the old town alleys of Rhodes Town. © Shutterstock

A stroll through the charming medieval city center, bordered by an imposing fortress, should be on everyone's bucket list. Take a stroll through cobblestone alleyways and under vaulted arches. Fragrant green gardens hide behind large wooden portals, and small boutiques beckon with local treasures at every corner. You won't get lost here, as the city is arranged in a strict grid so that you can always find your way back to the main street. From the highest points of the city, on a clear day, you can see the Turkish mainland, which is about 17 kilometers away from Rhodes.

Interesting detail:
The mosques in Rhodes are arranged perpendicular to Mecca. 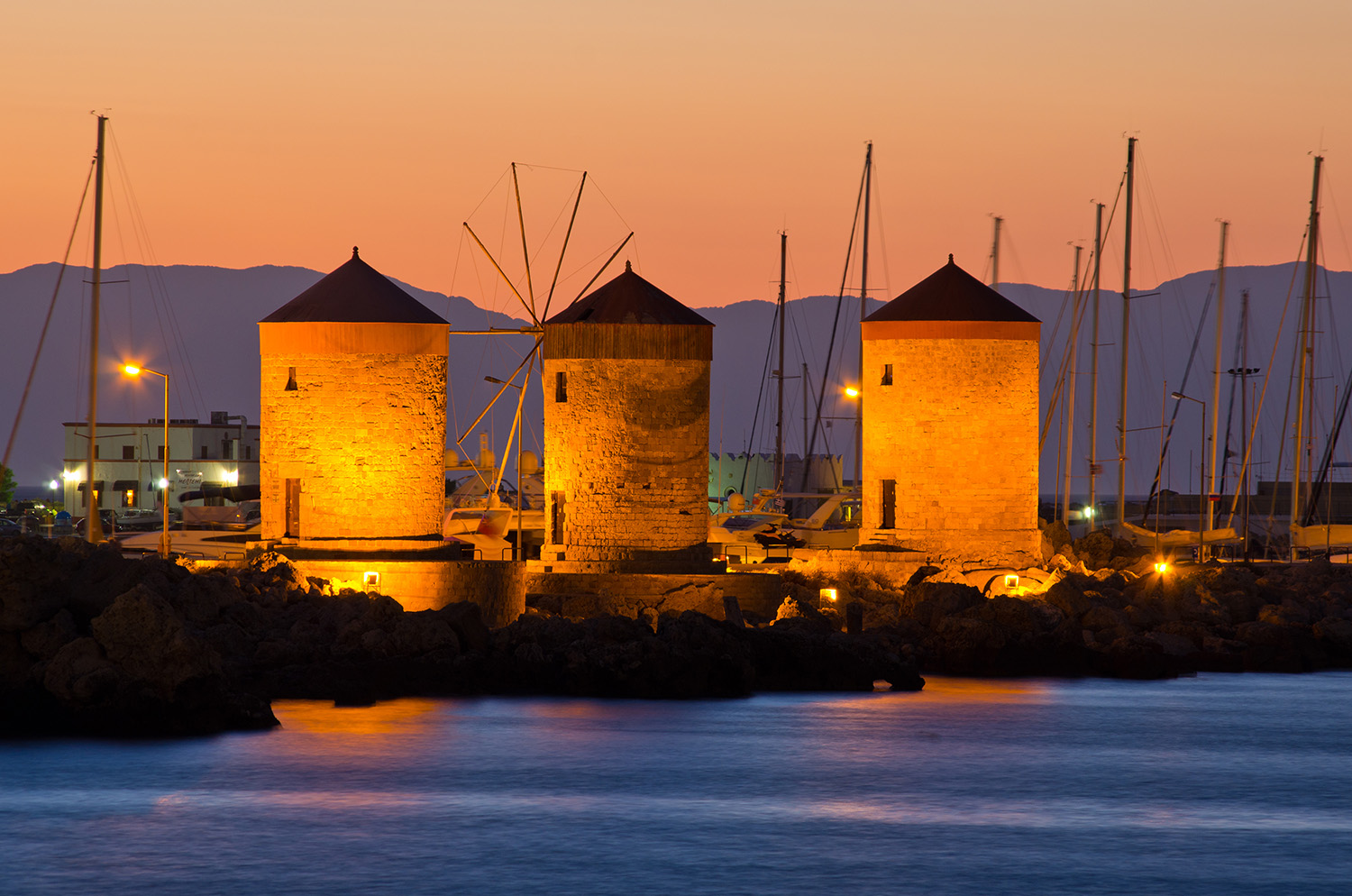 Not a colossus, but still quite picturesque: the windmills in Mandraki harbor. © Shutterstock

At the gates of Rhodes Town lies Mandraki Harbour with its iconic windmills, whose history dates back to the 5th century BC. For a long time people believed that the famous Colossus of Rhodes was enthroned here – by now, we assume that the 32-meter-high statue, which was probably destroyed during an earthquake in 227 BC, stood just outside the harbor. 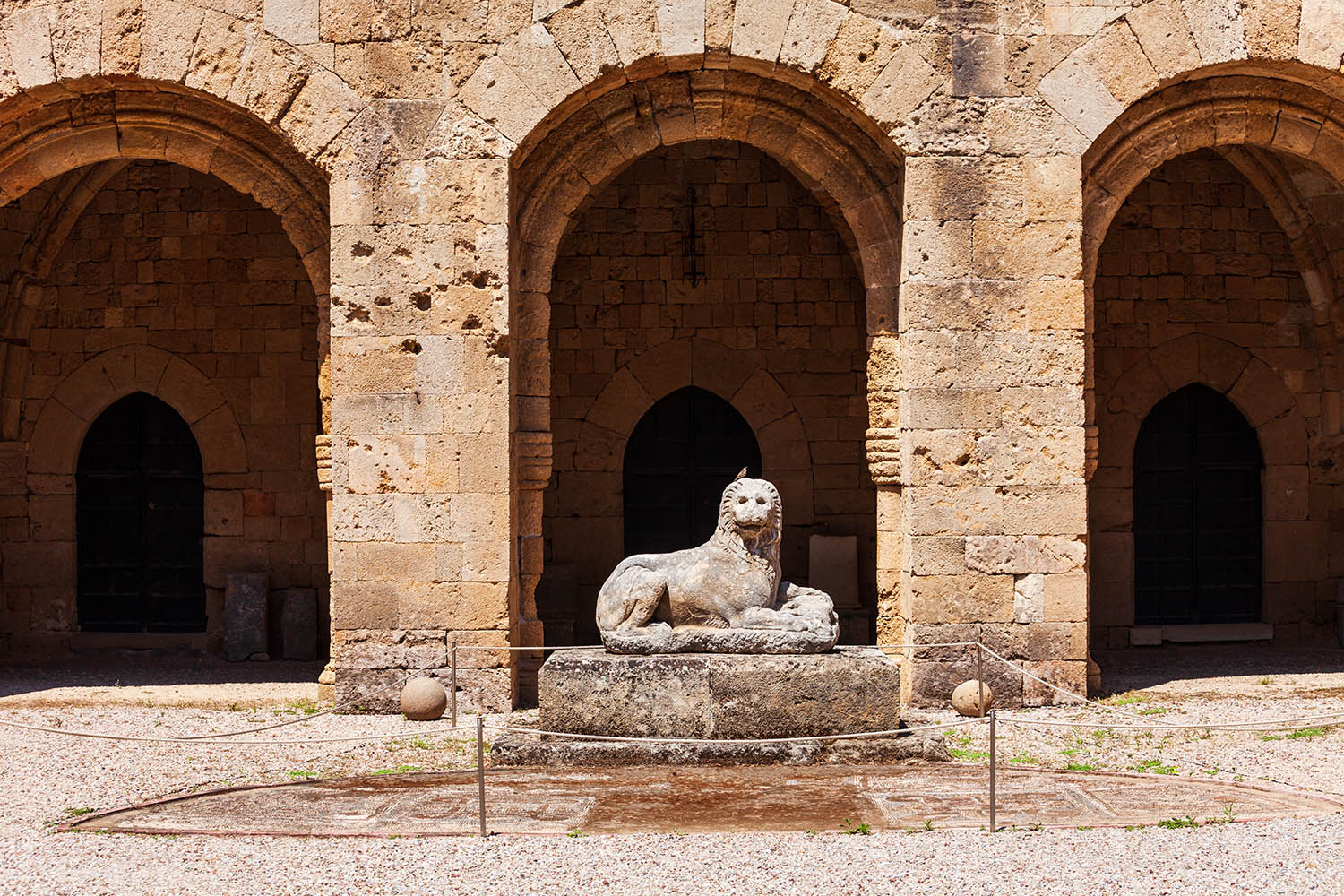 The late Gothic halls of St. John Hospital now house the island's Archaeological Museum. Numerous exhibitions tell of the history of the island – from stelae, vases and mosaics to the famous crouching Aphrodite and medieval remains of the Crusaders, such as coats of arms and tombs. 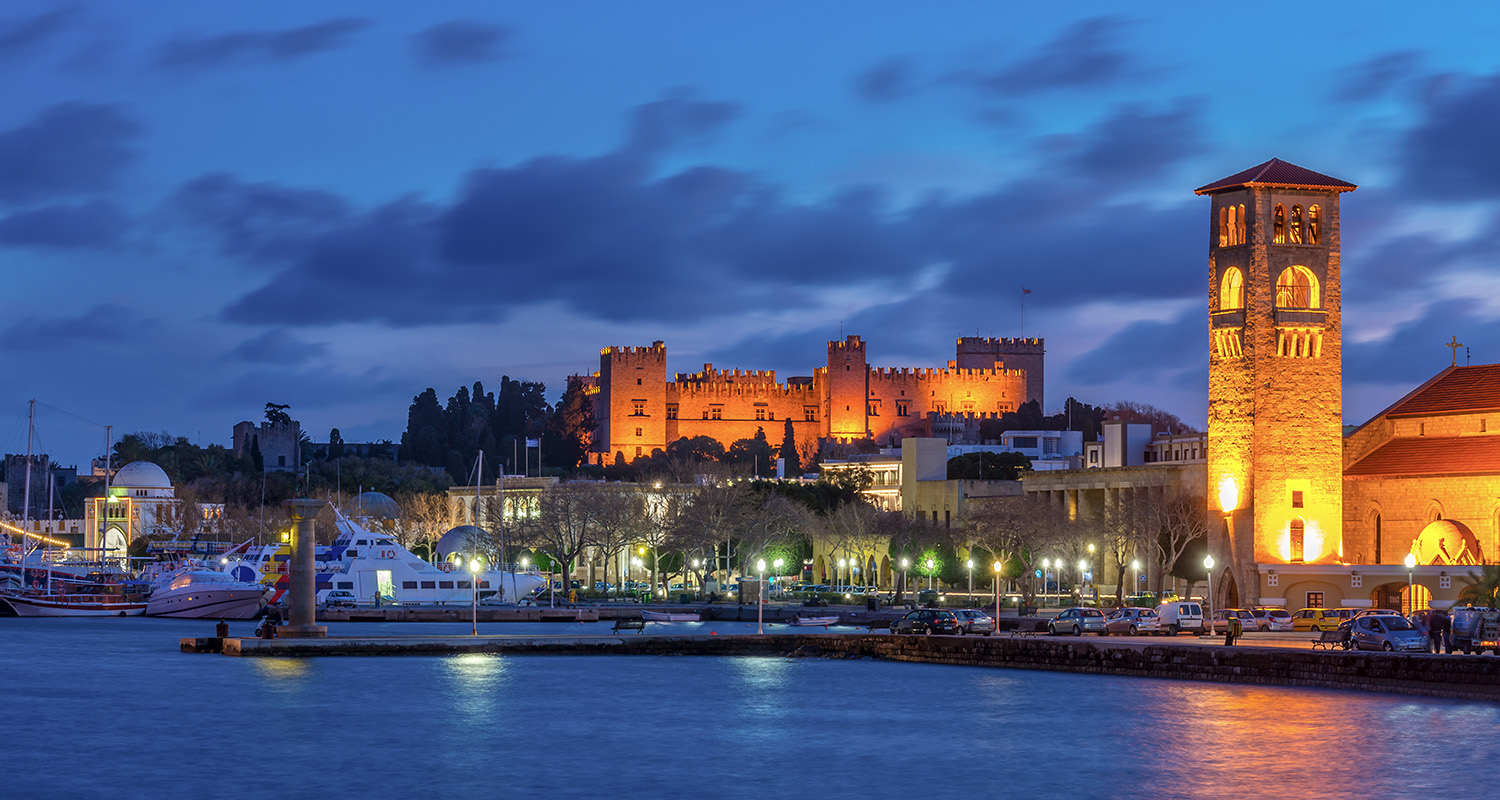 The Grand Master's Palace of the island capital served as a Byzantine citadel in the 7th century. When the Crusaders finally arrived on the Greek island, they built numerous streets, inns and buildings – and in the 14th century transformed the fortress into a palace for the grand masters of their order. The so-called Grand Master's Palace served as Benito Mussolini's residence in the 20th century. Today, the magnificent building presents itself as an exciting museum and historical monument. 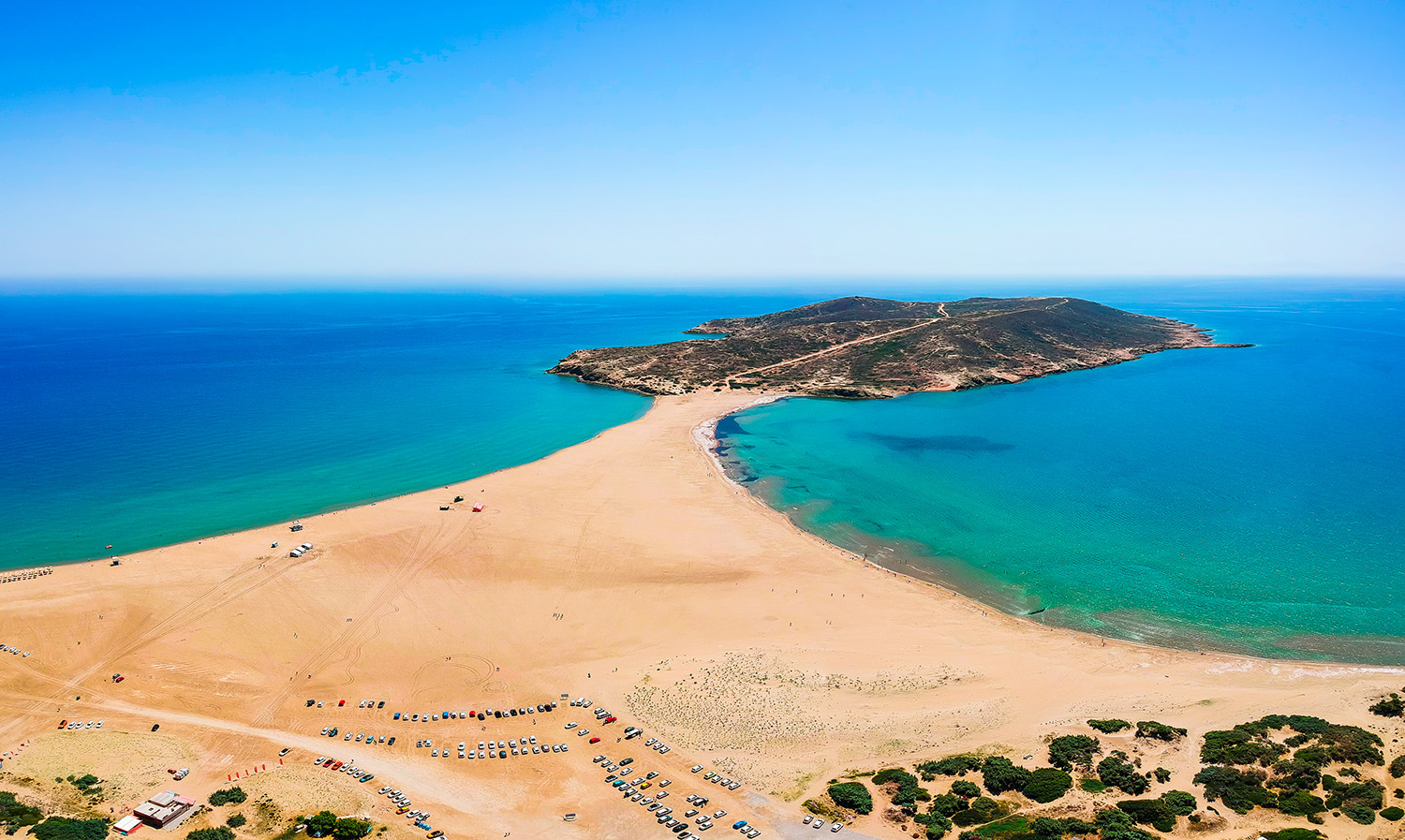 The tidal island can only be reached during low tide. © Shutterstock

The tidal island of Prasonisi is connected to the south coast of Rhodes by a fine sandbank during low tide that leads to the peninsula, where hiking trails wind through the nature reserve and kite and windsurfers sail along its coast. 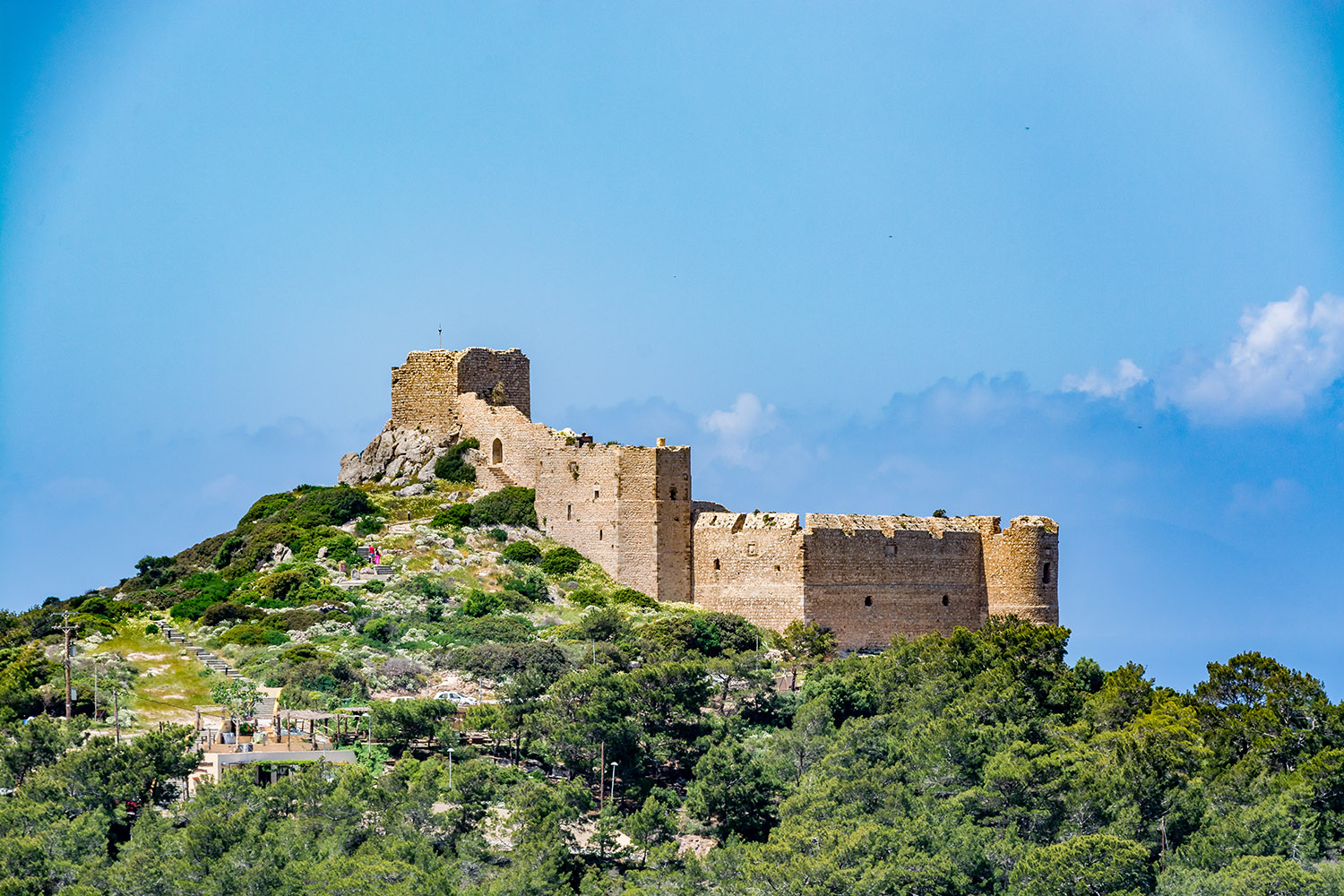 High above the island: the castle of Kritinia is more than 500 years old. © Shutterstock

Fantastic panoramic views and island history meet in the Venetian watchtower of Kritinia. In the 15th century, it was intended to warn of an attack by the Ottomans, who invaded in 1480. Today, you can visit the remains of the Venetian construction and enjoy the view over the Aegean Sea.

Lindos and its Acropolis 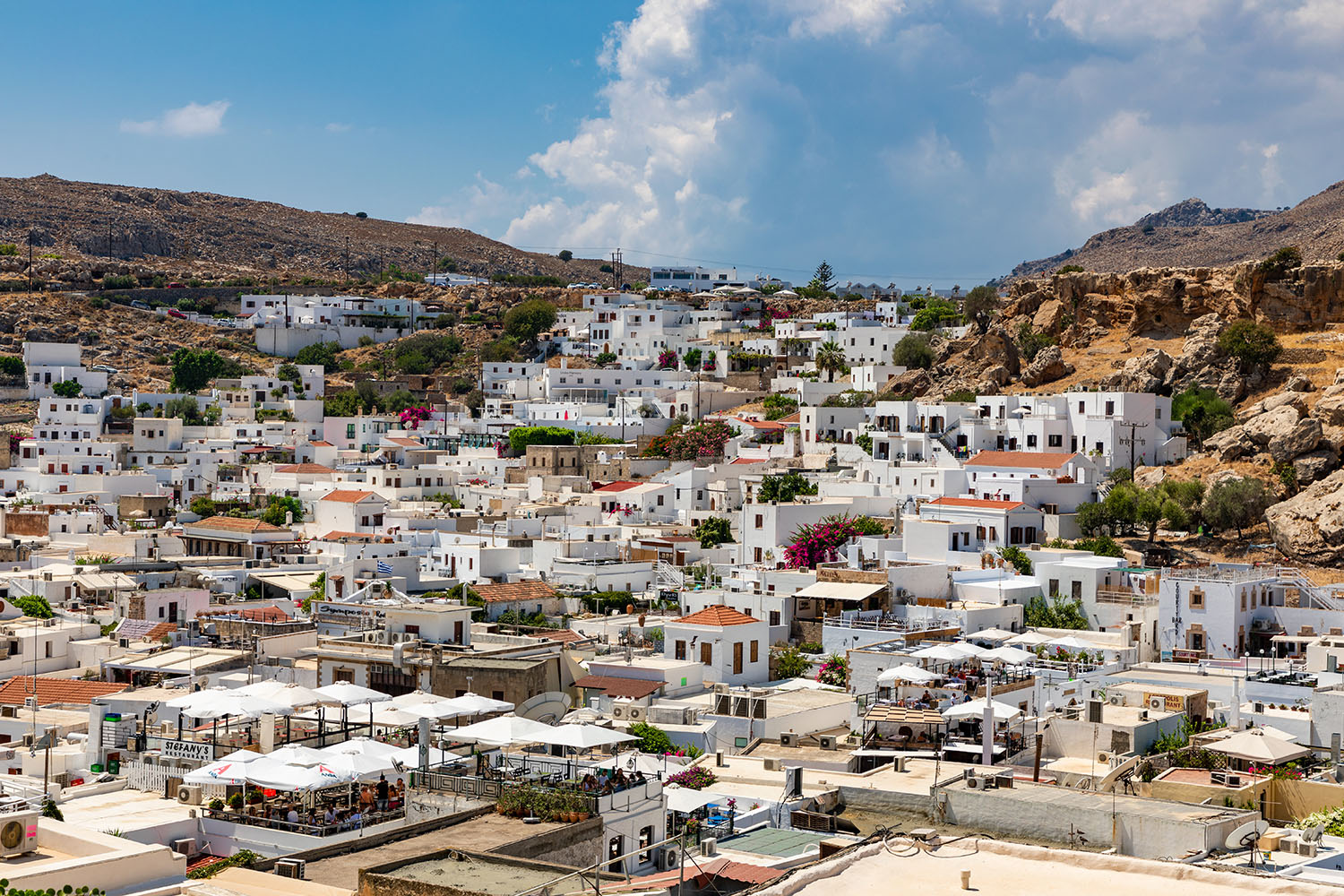 Whitewashed houses stand out against the surrounding hills in Lindos. © Dim Hou

Travelers spend idyllic days with good food, shopping and beach bliss in this community of 4,000 inhabitants. If you stroll through the narrow streets of the old town today, you will discover cute boutiques and small taverns on every corner, some of them with great rooftop bars. Afterwards, you can spread your towel may on the sandy beach in front of the port of Lindos. 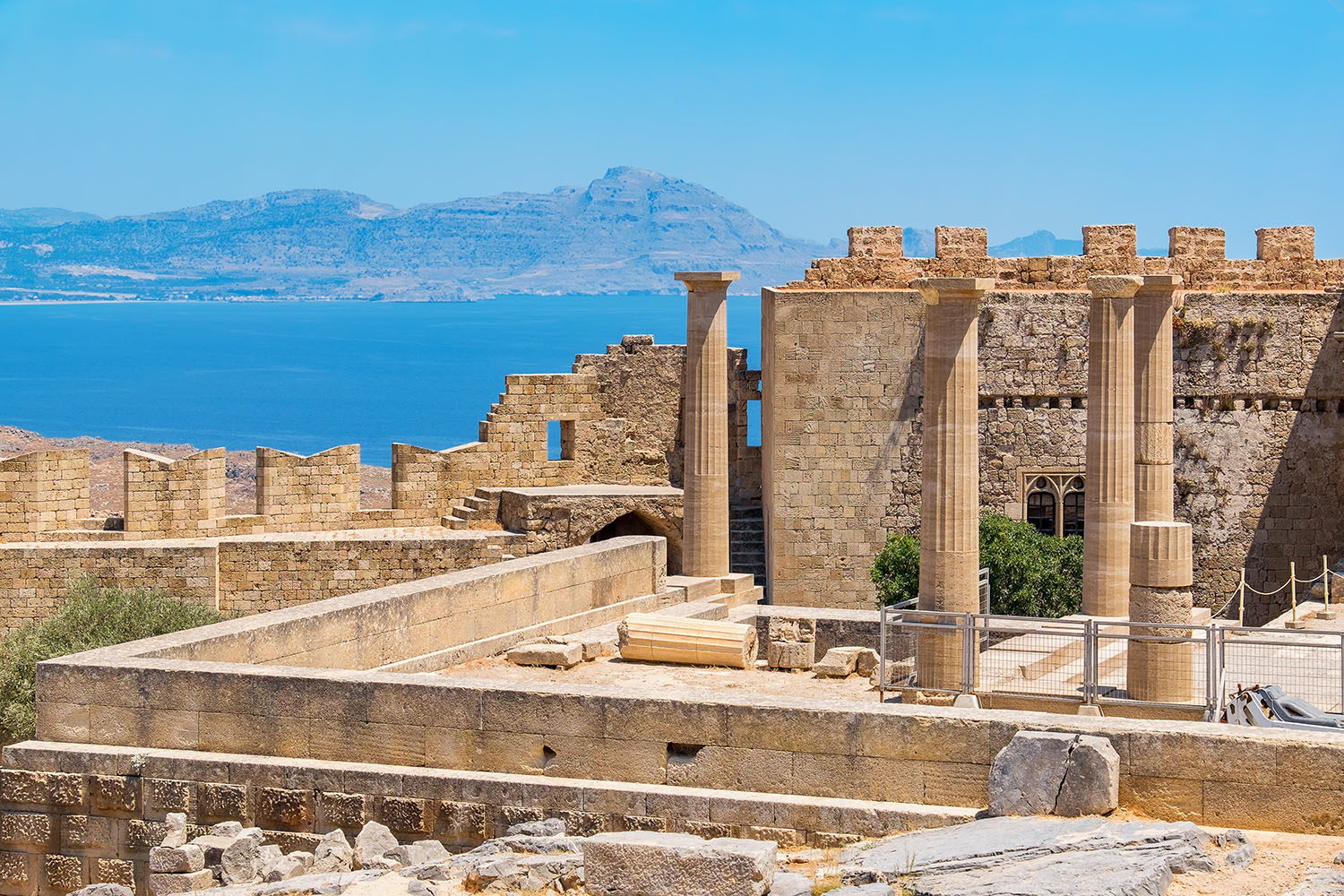 The Doric columns have been carefully restored – the site offers great views over the Aegean Sea. © Shutterstock

After a short climb over cobblestone paths, which leads through the alleys of Lindos and up to the cliff of the town, you reach the Acropolis of Lindos. Here, the Mycenaeans would gather to worship their deities. The later ruling powers of the island – the Byzantines, the Knights of St. John and the Ottomans – used the high platform as a vantage point for defense. 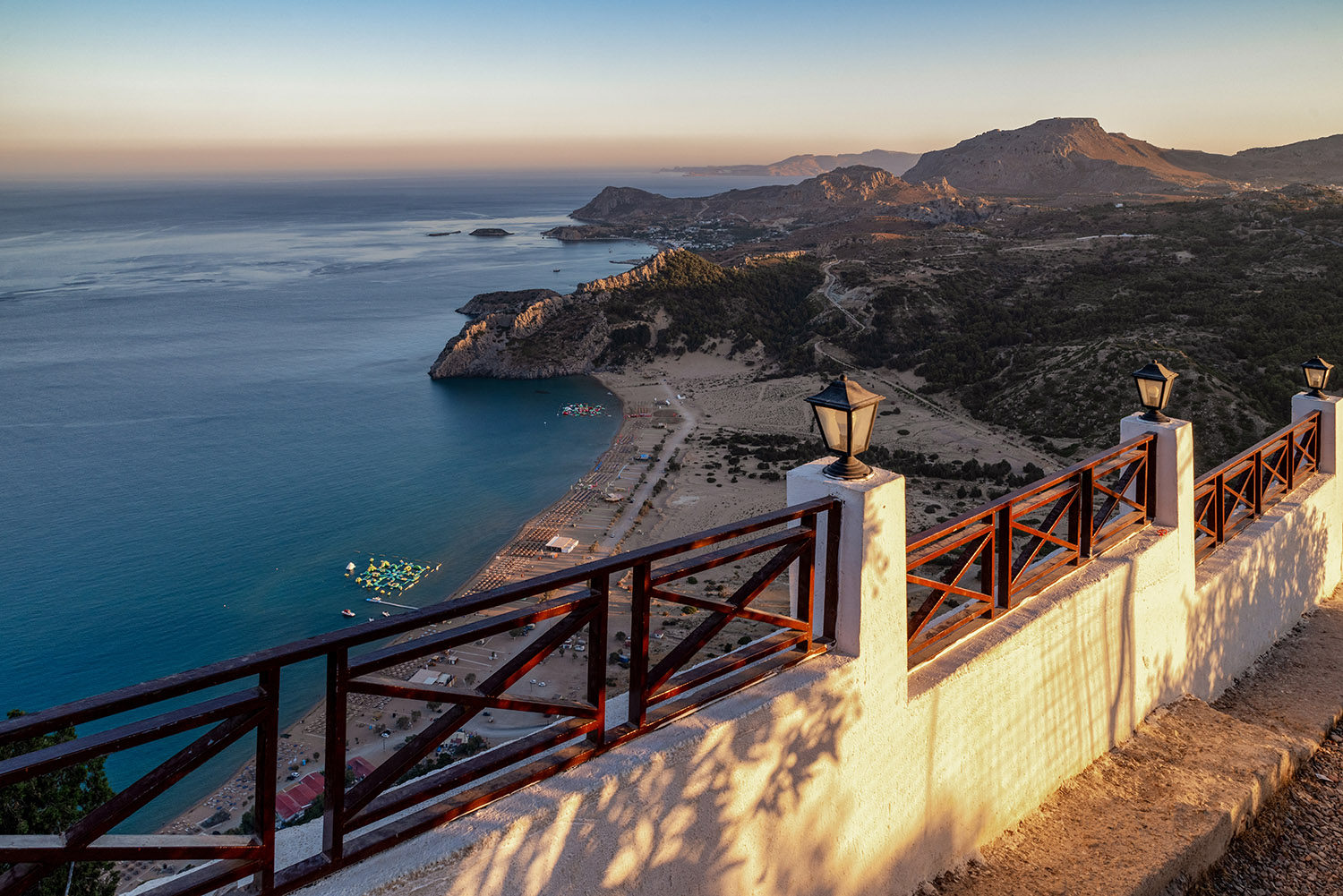 If you make it to the monastery, you'll be rewarded with a great view – and possibly a child. © Shutterstock

If you talk to the islanders and ask about the delightful church that towers over Tsambika Bay, you will be rewarded with one of the most charming legends of Rhodes: according to the story, the locals found a portrait of Santa Maria Tsambika and built a monastery in her honor. Women who had difficulty getting pregnant would climb the 350 steps to this magical 18th-century structure to ask the saint for a child. If they actually got pregnant, they promised to name the child after her. Today, women still make their way barefoot to the 300-meter-high peak – followed by tourists, but all they usually want is a great view instead. 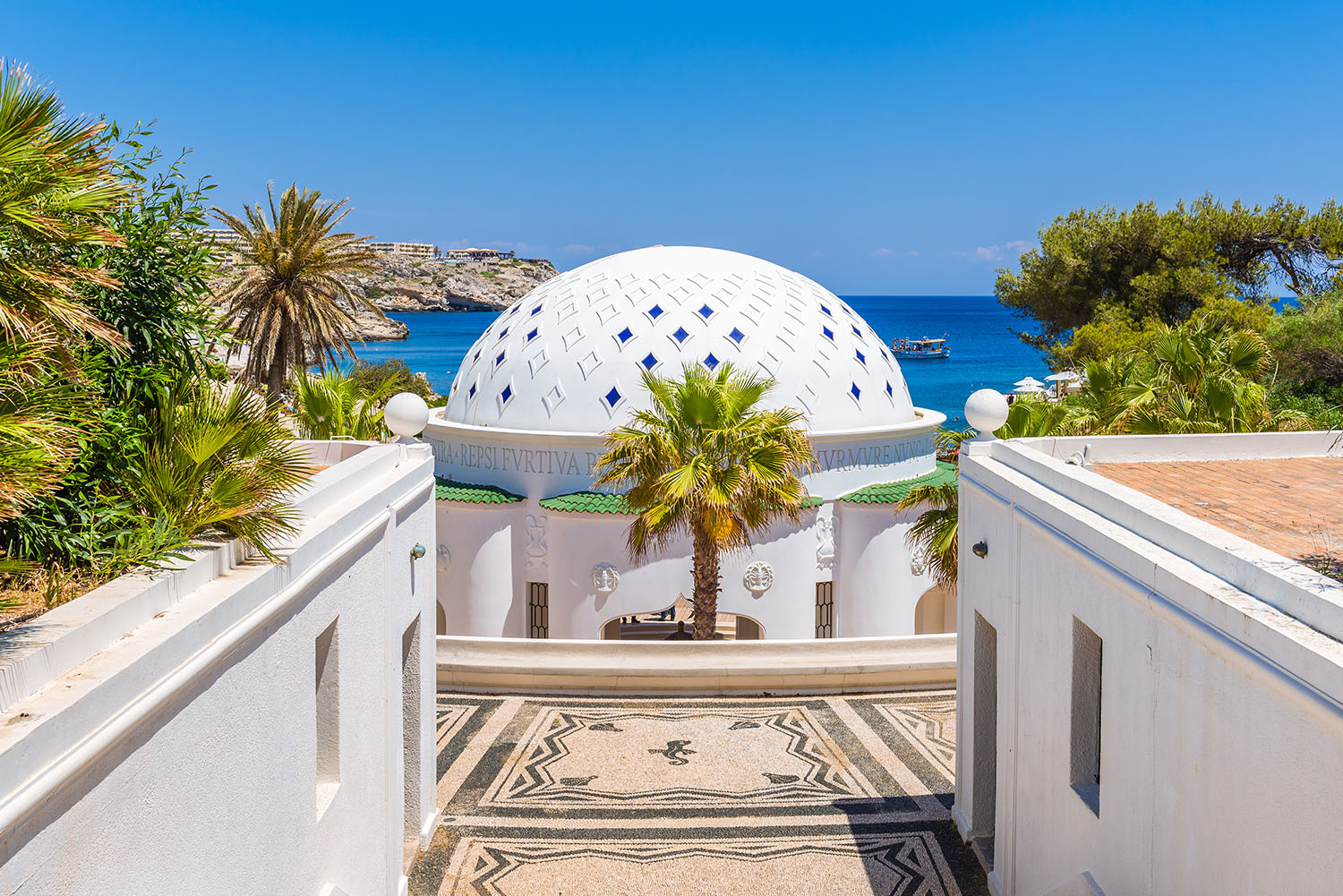 Hidden behind the spa, which is no longer used, is a great beach with loungers. They're very popular, so get there early! © Shutterstock

Known mainly for its turbulent history and the many dream beaches, hardly anyone knows that Rhodes is also home to hot springs. Even in ancient times, people made pilgrimages to Kalithea to soak up the healing effects of the hot waters. The Italians devoted themselves more thoroughly to the waters and built a spa with a Moorish pavilion and exotic gardens, which today only functions as an event venue.